Article: The Crisis of Marijuana Criminalization in Italy

The criminalization of so-called “soft drugs”—marijuana and its derivatives, such as hash—has a long history In Italy. Between the 1940s and the 1960s, Italy went from being one of the world’s top hemp producers to a country where hemp cultivation, possession, sale and use is severely sanctioned.

Because of a law called Fini-Giovanardi, between 2006 and 2014 Italian courts did not distinguish between “soft” and “hard” drugs when sanctioning drug-related charges. The recommended sentence for marijuana users and dealers was six to 20 years in prison.

“The officers told me, ‘a boy of your age … why don’t you go whoring instead of smoking joints?’”

Drugs in Italy are regulated by a law enacted in 1990—the Fini-Giovanardi law replaced it in 2006 and was ultimately defined as unconstitutional in 2014, leaving the original law in power once again. The culture of criminalization has remained deeply rooted in Italy’s national politics and its law enforcement.

“When they put me in the car to take me to the barracks, the officers told me, ‘a boy of your age … why don’t you go whoring instead of smoking joints?’” Elia said. “I was afraid.” Shortly afterwards he gave the officers all the drugs he had at home—about half an ounce of marijuana.

Elia was charged with dealing and sentenced to one year’s house arrest, during which police officers were free to inspect his home as often as they wished, at all hours of the day or night. He was forbidden to see friends or engage in social activities outside of school. After a few months, he was permitted to play recreational sports. He still felt lucky; he had been close to receiving a sentence that was much harsher.

One-third of the 60,000 people incarcerated in Italy are in prison on drug-related charges. In 2019 alone, police reported 41,744 Italians to the Prefect as drug users—78 percent of them for using marijuana or hash.

Drug prohibition has been estimated to cost Italy the equivalent of nearly $25 billion per year. That cost supports detention conditions that are “ineffective and repressive drug legislation, which is one of the main causes of entry and stay in prison,” according to a 2019 report published by the Associazione Antigone. The European Union has fined Italy many times for prison overcrowding, a violation of prisoners’ human rights. Much of the problem of prison overcrowding could be solved or largely alleviated by more liberal drug policy.

The Crisis of Marijuana Criminalization in Italy 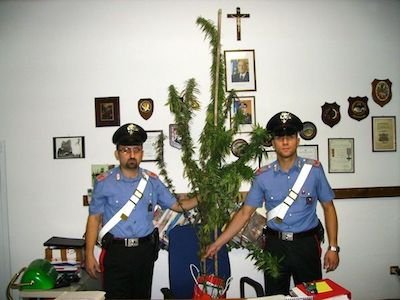