Turn the clock back by 42 years, and you would have seen the USA this week struggling in the turmoil of a debate that gripped the nation.

America’s relationship with cannabis has always been an uneasy one. In the 1960s it came to represent the free movements of California which so enchantingly captured the imagination of its youth from coast to coast. Yet, on the other side of the scales, the weightier suited bureaucrats would often dictate the script.

So when, in August 1977, President Jimmy Carter tabled the idea that possession of an ounce of marijuana should be deemed legal, the scene was set for a long-running drama that would continue to be played out to this day.

Even by the seventies, the USA was, in many officials’ eyes, still recovering from the Second World War. The need to get the country back on its feet was paramount, and the distraction of allowing a nation to suddenly start getting high with the enduring blessing of Capitol Hill was almost unthinkable to just about every senator in the land.

Despite being the spark that lit many fires of free thinking and peace movements synonymous with marijuana, the Vietnam War had pulled the rug from under the feet of those keen to see the prospect of legalisation become a talking point in the corridors of the White House.

However, once again, the powers-that-be felt their endeavours in an unpopular conflict which claimed 58,000 American lives gave cause to recalibrate an entire nation. It was a time for conservative minds, not liberalism – something Carter’s predecessor, Gerald Ford Jnr, had embodied. 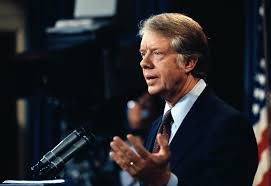