Article: Weed is legal in N.J. Can I smoke it on the beach?

Actually a very good question as too many NJ towns are doing their best to close down regulated cannabis before the get go.  So, we totally understand why this actually might be a question that people need to know the answer to in New Jersey.

Weed is legal in New Jersey and the season at the Shore will officially start in just a few weeks. But that doesn’t mean you should celebrate by lighting up on the beach.

Gov. Phil Murphy signed three laws overhauling marijuana prohibition in February. One set up the framework for a legal weed industry, another ended all penalties for possessing up to six ounces and the third did away with fines and arrests for those under 21 caught with weed or alcohol.

Those laws made the penalties for using and possessing marijuana nearly non-existent. But the key here is nearly. The law still bans smoking, vaping and aerosolizing cannabis in public places and under the New Jersey Smoke-Free Air Act, which prohibits smoking in workplaces, many indoor areas and beaches.

The legalization law also allows for cities and towns to pass local ordinances banning any consumption of a cannabis item in a public space.

Some are taking this route. On Thursday, Wildwood Crest banned all smoking at its beaches and cannabis use in public places. So did Ocean City, while Cape May has considered a similar ordinance.

Beaches along the Shore have largely banned smoking or shrunk designated areas for smokers. An expansion of the Smoke-Free Air Act signed by Murphy in 2018 allowed smoking at just 15% of beaches and in parking lots. Those caught smoking outside of those carriers could receive fines of $250 for a first offense, $500 for a second and $1,0000 for continuing offenses.

At the time the law passed, it was not clear how easily it could be enforced.

And it could be complicated for weed use, too. Attorney General Gurbir Grewal issued guidance in February telling police they can no longer stop someone after smelling marijuana and cannot search someone under the age of 21 for alcohol or weed.

Steve Barnes, a spokesman for the attorney general’s office, said using marijuana on the beach or in public spaces could violate the Smoke-Free Air Act, a local municipal ordinance or the open container laws if the individual is smoking in a motor vehicle. People would typically fine someone for a first offense

But it’s not so easy for a cop to tell if someone is vaping marijuana or an e-cigarette. If police illegally search someone, they could face criminal charges. 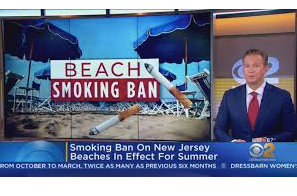