As pot-stock mania gripped North America in 2018, a bidding war struck up for a relatively small marijuana-growing property in a Toronto suburb.

The 9,000-square-foot facility was only capable of growing about C$12 million ($9 million) worth of pot in a year, but that didn’t seem to matter. Marijuana companies were surging in interest and market cap as Canada planned to legalize recreational pot sales, and companies that established at least one cultivation license were receiving beneficial treatment from Health Canada, which meant snagging the property and its accompanying license could lead to a legitimate growing business in more ways than one.

RavenQuest BioMed Inc. RVVQF, +2.35% RQB, +2.08% eventually “won” the bidding, agreeing to pay nearly C$30 million. But after Health Canada stopped expediting requests from license holders, RavenQuest was unable to capitalize on its purchase in the way it had thought. At the time, the company had a recorded value of C$27.7 million, or roughly C$1,385 per square foot, on its books, well more than the going rate for such facilities.

Months later, RavenQuest recorded a C$11.7 million impairment charge for the license at the end of the company’s fiscal year — a loss that was nearly 20 times more than its most recent quarterly revenue.

At the premier pot companies, the losses could be much larger and more important. Similar acquisitions played out across the cannabis industry, and the claimed value of those purchases now sits on cannabis companies’ books like a ticking time bomb. The six largest licensed cannabis producers in Canada have recorded more than $4 billion in goodwill — the amount allocated to certain acquisitions beyond the value of their physical assets — risking large and potentially punishing write-downs in the future. 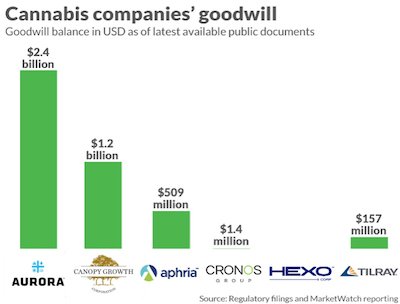