WVTF radio reports that garden centers are being inundated by people wanting to grow their own cannabis and rightly too !

It’s 6:30 on a hot weeknight in Richmond – almost closing time for Happy Trees Agricultural Supply, but the place is packed.

Customers have come for advice on how to grow cannabis, and there’s a lot to learn according to regional operations manager Richard Gropper.

“People have had their own systems for as long as they’ve been growing cannabis I guess,” says  Gropper.  “It’s probably one of the most studied and argued over plants in the history of the world at this point.”

If you’re growing outside, he notes, you have to worry about bugs.

“Corn earworms, tobacco horn worms are a big one here too.  Powdery mildew in the hot and humid southeast.  Those are the biggest ones we run into, but then spider mites and russet mites and things like that are more cannabis specific.”

“You get a better and faster product.  The stems are three times thicker.  The leaves just look fabulous.  Yeah – it’s really impressive.”

Like her colleagues in Richmond, she’s swamped with questions about cultivating cannabis.

“We answer probably 300 questions a day,” she says.  “We’re helping people get set up in their houses, set up outdoors or set up with hydro systems.”

Scott  and Gropper advise them on the best lights to use inside, how to monitor the PH of water, what fertilizer to use and how to measure nutrient levels.  Customers might even want furniture for their pot.

“This is an eb and flow table,” Gropper says, gesturing to a four-legged wooden tray.  “There’s a nutrient reservoir at the bottom.  When the timer kicks on it floods this table with the plants sitting in there.”

Or clients can purchase a tent, using lights during the day and flooding it with carbon dioxide at night to speed growth.  After just two months, a well-tended plant might be four feet high and two feet wide, but before it gets that big, Gropper explains why male plants must go.

“The males don’t produce flowers, which is what most people are going for.  That’s the finished product – the bud,” he explains.  “Most people will cul the males, because if you don’t the pollen will pollinate the female flowers and you will get seeds.” The differences emerge when the plant is less than a foot tall.  He shows customers how to check where the leaves meet the stem.  Females have long, thin pistils, while males have two small pollen sacks.

Gropper and Scott admit it’s possible to produce pot without all the fuss.  You can’t buy seeds legally, but people can give them away, and then it’s up to the grower to put them in the ground and add water.

“You can do that,” Gropper says.

If you just want to stick a seed in the ground it will grow.  That’s why they call it weed,” Scott adds with a laugh.

All this excitement is infectious.  Twenty-five-year-old Lauren Wade doesn’t even smoke pot, but she likes the ambience at Happy Trees.

“Everyone is super friendly.  Everyone is kind and is excited.   I come here every Friday evening after work and hang out.”

Her dad has also stopped in, although she’s not sure if he intends to grow cannabis.

“If my mom lets him,” she says with a smile.

Both Happy Trees and Fifth Season hope to offer classes for aspiring cannabis growers, and Gropper figures there could be a lot more business in the years to come if lawmakers in Virginia insist the product be local.

“It would be a shame if we outsourced production to out-of-state producers – especially to west coast people,” Gropper says.  “We just think this is a Virginia thing.  We can definitely put out a superior produce and keep it in Virginia.”

The General Assembly must decide how and where Virginia will get its cannabis by 2024. 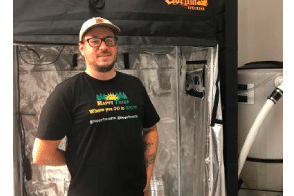