Paddy is a 15-year-old golden retriever, much loved but slow on his legs.

He is on medication for arthritis and has to have blood tests every six months to check for kidney damage — a common side effect.

“It can also cause vomiting, but he’s OK, as long as he gets fed a lot,” his owner Della Stevens said.

“We give him one tablet at night and he deals with it alright. Without it, he’d really struggle to get up and down.”

It is still an oddity in Australia but in many US states, medicinal cannabis medications including tetrahydrocannabinol (THC) — the psychoactive component in cannabis — are being used as a treatment for pets with conditions such as arthritis and epilepsy.

It is a big and growing business. 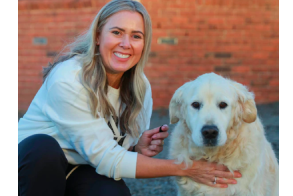