Key points of the legislation:

In Conflict with the Commonwealth of Australia

Laws were passed in the ACT Legislative Assembly on Wednesday afternoon, allowing possession of up to 50 grams per person and a maximum of four plants per household.

The legislation is  in conflict with Commonwealth laws prohibiting the possession of cannabis.

The legislation will come into effect as of January 31, 2020.

So what is allowed, and what isn’t?

Any adult in the ACT will be able to grow two cannabis plants per person, with a maximum of four per household.

They will also be allowed to be in possession of up to 50 grams of dry cannabis, or 150 grams of wet cannabis.

Amendments suggested by the Greens to allow the cultivation of hydroponic cannabis were voted down, along with amendments providing greater allowances to those growing cannabis for medicinal purposes.

There also remain plenty of rules around when and where cannabis can be consumed.

It cannot be consumed in public, or anywhere near children, and will also have to be stored somewhere inaccessible to children.

Cannabis plants will have to be grown somewhere not accessible to the public.

It’s legal under ACT law, but you may still be arrested

There is a very real chance consuming cannabis in the ACT could still put a person in handcuffs.

While speaking on the bill in the Legislative Assembly on Wednesday morning, ACT Attorney-General Gordon Ramsay made clear anyone growing or consuming cannabis was still carrying a degree of risk.

“This does not entirely remove the risk of people being arrested under Commonwealth law, and we are being up front with the community about that,” he said.

“The ACT’s legislation attempts to provide a clear and specific legal defence to an adult who possesses small amounts of cannabis in the ACT, but is prosecuted under Commonwealth law.

The ACT Government sought the advice of Commonwealth prosecutors on the legal risk, and received a very strange response.

Cannabis is now legal in Canberra, but what impact will Commonwealth laws have?

In one letter received last week, they were advised by Commonwealth Director of Public Prosecutions (CDPP) Sarah McNaughton SC that the ACT’s laws would provide a defence to anyone charged under Commonwealth law.

And Ms McNaughton suggested that would be considered, before the CDPP went ahead with a prosecution.

But on Tuesday a second letter was received, fully rescinding that legal advice, apologising, and suggesting it was a matter with “legal complexities that had not initially been appreciated”.

For their part, ACT Policing has indicated it understands the position of the ACT Government, and intends to respect it as best as it can. 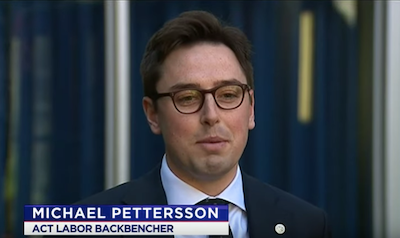