First up we are presuming that “Epidyolex” as reported by both the BBC & The Guardian is “Epidiolex” branded for the European market.

In their full press release we have re-published below they do note the two brand names but it isn’t 100% clear that they are one and the same thing?

We’re presuming both names “Epidyolex” & “Epidiolex” refer to exactly the same product and the former is the US product name and the latter the European brand name. 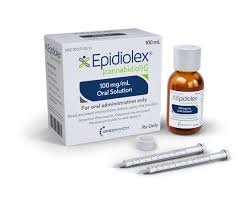 The EU has approved for the first time the use of a medicinal cannabis product aimed at patients with two rare, but severe, forms of childhood epilepsy.

Doctors can prescribe Epidyolex – an oral solution of cannabidiol, which comes from the cannabis plant – if they think it will help sufferers.

It has been approved for use in the UK and other European countries, but the NHS does not currently recommend it.

But some parents want alternatives that contain a component not in this drug.

Last month, the UK’s National Institute for Health and Care Excellence made an initial decision not to recommend prescribing Epidyolex, due to lack of evidence of long-term effectiveness.

Final guidance is due later this year.

The drug does not contain any of the psycho-active component of cannabis, a compound called tetrahydrocannabinol (THC).

Some parents, who have travelled to the Netherlands to buy cannabis medicines, feel the treatment will not help many children because it does not contain THC, which they argue has helped their children.

Epidyolex has been approved as a treatment option for children as young as two with Lennox-Gastaut syndrome or Dravet syndrome – difficult-to-treat conditions that can cause multiple seizures a day.

The medication, developed by GW Pharmaceuticals, will be used in combination with another epilepsy medication called clobazam.

What about other medical cannabis products?

There are many different medical cannabis products. The use of ones containing THC was legalised across the UK in November 2018.

These treatments can be prescribed only by specialist doctors in a limited number of circumstances where other medicines have failed.

Few of these unlicensed prescriptions have been made on the NHS.

There are some other cannabis-based medicines that are licensed in the UK.

Nabilone is a medicine, taken as a capsule, that has been developed to act in a similar way to THC.

Doctors can give it to people having chemotherapy to help with nausea.

Sativex is a cannabis-based medicine that contains THC and CBD and is licensed in the UK for people with multiple sclerosis.

Recreational use of cannabis remains illegal.

What do experts say?

Ley Sander, Medical Director at the Epilepsy Society and Professor of Neurology at University College London, said: “This new drug will bring hope for some families and EU approval feels like a positive step. Medicinal cannabis, however, still remains a medical minefield and there are many hurdles ahead.

“CBD was not recommended by NICE for prescription on the NHS. It is important that the pharmaceutical industry continues to work with the medical advisory body to ensure that drugs are cost effective and that its long-term effects are clear.”

LONDON and CARLSBAD, Calif., Sept. 23, 2019 (GLOBE NEWSWIRE) — GW Pharmaceuticals plc (Nasdaq: GWPH) (“GW”, “the Company” or “the Group”), world leader in discovering, developing and commercialising cannabinoid prescription medicines, today announces that the European Commission (EC) has approved the marketing authorisation for EPIDYOLEX® for use as adjunctive therapy of seizures associated with Lennox‑Gastaut syndrome (LGS) or Dravet syndrome, in conjunction with clobazam, for patients 2 years of age and older. The approval paves the way for the launch of the medicine across Europe.

“The approval of EPIDYOLEX® marks a significant milestone, offering patients and their families the first in a new class of epilepsy medicines and the first and only EMA-approved CBD medicine to treat two severe and life-threatening forms of childhood-onset epilepsy,” said Justin Gover, GW’s Chief Executive Officer. “This approval is the culmination of many years of dedication and collaboration between GW, physicians and the epilepsy community. We believe patients and physicians deserve access to rigorously tested and evaluated cannabis-based medicines, manufactured to the highest standards and approved by medicines regulators, and we are delighted to be the first to offer this solution to the epilepsy community.”

The approval of cannabidiol oral solution is based on results from four randomised, controlled Phase 3 trials. These studies incorporate data from more than 714 patients with either LGS or Dravet syndrome, two rare forms of epilepsy with high morbidity and mortality rates, which place a significant burden on families and caregivers. Many patients with LGS or Dravet syndrome have multiple seizures per day, which puts them at ongoing risk of falls and injury. Despite current anti-epileptic drug treatment, both of these severe forms of epilepsy remain highly treatment-resistant.1,2,3

“The approval of cannabidiol oral solution is an important milestone for patients and families whose lives are significantly impacted by these rare, complex and life-long forms of epilepsy,” said Isabella Brambilla, Chairman, Dravet Syndrome European Federation. “We are very happy that patients will now have access to a much-needed, new treatment option, and one routed through a rigorous clinical trials programme and licensed by the EMA.”

“LGS and Dravet syndrome are two of the most severe and difficult-to-treat forms of childhood-onset epilepsy, with few patients achieving adequate seizure control,” said Professor Elinor Ben-Menachem, University of Goteborg, Sahlgren Academy and Hospital in Sweden. “The EMA approval of EPIDYOLEX® will bring hope to patients and families, with the potential to better control seizures and improve quality of life.”

When added to other anti-epileptic therapies, EPIDYOLEX® significantly reduced the frequency of seizures in patients with LGS and Dravet syndrome. The most common adverse reactions that occurred in patients treated with the medicine were somnolence, decreased appetite, diarrhoea, pyrexia, fatigue and vomiting. GW’s development programme represents the only well-controlled clinical evaluation of a cannabinoid medication for patients with LGS and Dravet syndrome.

GW’s cannabidiol oral solution was approved by the U.S. Food and Drug Administration (FDA) in June 2018 under the trade name EPIDIOLEX® for the treatment of seizures associated with LGS or Dravet syndrome in patients two years of age or older.

The EC decision is valid in all 28 countries of the European Union, alongside Norway, Iceland and Liechtenstein.

About GW Pharmaceuticals plc and Greenwich Biosciences, Inc.
Founded in 1998, GW is a UK-based global biopharmaceutical company focused on discovering, developing and commercialising novel therapeutics from its proprietary cannabinoid product platform in a broad range of disease areas. In June 2018 GW, along with its U.S. subsidiary Greenwich Biosciences, received U.S. FDA approval for EPIDIOLEX® (cannabidiol) for the treatment of seizures associated with Lennox-Gastaut syndrome (LGS) or Dravet syndrome in patients two years of age or older. GW developed the world’s first plant-derived cannabinoid prescription medicine, Sativex® (nabiximols), which is approved for the treatment of spasticity due to multiple sclerosis in more than 25 countries around the world. The Company has a deep pipeline of additional cannabinoid product candidates, which includes compounds in Phase 1, 2 and 3 trials for epilepsy, autism, glioblastoma and schizophrenia.

About EPIDIOLEX®/EPIDYOLEX® (cannabidiol)
EPIDIOLEX®/EPIDYOLEX® (cannabidiol), the first prescription, plant-derived cannabis-based medicine approved by the FDA for use in the U.S., is an oral solution which contains highly purified cannabidiol (CBD). The medicine is for the treatment of seizures associated with Lennox-Gastaut syndrome (LGS) or Dravet syndrome in patients two years of age or older and is the first in a new class of anti-epileptic medications with a novel mechanism of action. EPIDYOLEX® received a positive opinion from the European Medicines Agency’s (EMA) Committee for Medicinal Products for Human Use (CHMP) in July 2019 and the European Commission (EC) granted the marketing authorisation on 23 September 2019 for adjunctive use in conjunction with clobazam. The medicine was granted an Orphan Drug Designation from the EMA for the treatment of seizures associated with LGS, Dravet syndrome, and Tuberous Sclerosis Complex (TSC).

About Dravet syndrome
Dravet syndrome is a severe infantile-onset and highly treatment-resistant epileptic encephalopathy frequently associated with genetic mutations in the sodium channel gene SCN1A. Onset of Dravet syndrome occurs typically during the first year of life in previously healthy and developmentally normal infants. Initial seizures are often body temperature related, severe, and long-lasting. Over time, patients with Dravet syndrome often develop multiple types of seizures, including tonic-clonic, myoclonic and atypical absences and are prone to bouts of prolonged seizures including status epilepticus, which can be life threatening. Risk of premature death including SUDEP (sudden unexpected death in epilepsy) is elevated in patients with Dravet syndrome. Additionally, the majority of patients will develop moderate to severe intellectual and development disabilities and require lifelong supervision and care.

About Lennox-Gastaut syndrome (LGS)
The onset of LGS typically occurs between ages of 3 to 5 years and can be caused by a number of conditions, including brain malformations, severe head injuries, central nervous system infections and genetic neuro-degenerative or metabolic conditions. In up to 30 percent of patients, no cause can be found. Patients with LGS commonly have multiple seizure types including drop and convulsive seizures, which frequently lead to falls and injuries, and non-convulsive seizures. Resistance to anti-epileptic drugs (AEDs) is common in patients with LGS. Most patients with LGS experience some degree of intellectual impairment, as well as developmental delays and aberrant behaviours.

Forward-looking statements
This news release contains forward-looking statements that reflect GW’s current expectations regarding future events, including statements regarding financial performance, the timing of clinical trials, the timing and outcomes of regulatory or intellectual property decisions, the relevance of GW products commercially available and in development, the clinical benefits of EPIDIOLEX®/EPIDYOLEX® (cannabidiol) oral solution and Sativex® (nabiximols), and the safety profile and commercial potential of both medicines. Forward-looking statements involve risks and uncertainties. Actual events could differ materially from those projected herein and depend on a number of factors, including (inter alia), the success of GW’s research strategies, the applicability of the discoveries made therein, the successful and timely completion and uncertainties related to the regulatory process, and the acceptance of EPIDIOLEX®/EPIDYOLEX®, Sativex®and other products by consumer and medical professionals. A further list and description of risks and uncertainties associated with an investment in GW can be found in GW’s filings with the U.S. Securities and Exchange Commission. Existing and prospective investors are cautioned not to place undue reliance on these forward-looking statements, which speak only as of the date hereof. GW undertakes no obligation to update or revise the information contained in this press release, whether as a result of new information, future events or circumstances or otherwise.