The military government’s cabinet of ministers in May gave the green light to amend the country’s drug laws to allow research on the effects of medicinal marijuana on humans. The bill is currently being debated in the National Legislative Assembly, which is expected to give the nod to legalization in up to nine months before it becomes law. That would make Thailand the first country in Asia to legalize medical cannabis.

Thailand could have some natural attributes as a marijuana capital. Costs of production could be lower, making it a potentially attractive destination for foreign producers. The Southeast Asia nation’s year-long tropical climate means lower costs for artificial light and temperature controls, paired with Thailand’s previous reputation of marijuana cultivation.

“No other country offers the combination of benefits that Thailand offers within a single jurisdiction,” said Jim Plamondon, vice president of marketing for Thai Cannabis Corp. It is the country’s first legal cannabis company, which according to its website is working with Maejo University to develop products and medicines. “Thailand has not only the large medical tourism industry, it also has an unparalleled system of traditional medicine that is regulated and standardized.” 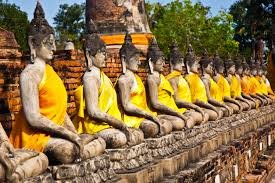