Throughout April, the Yale Undergraduate Prison Project is hosting a virtual speaker series in partnership with Cage-Free Cannabis — an organization that advocates for reparative, economic and environmental justice regarding cannabis usage — on equity in the cannabis industry. Every Tuesday, guests such as business owners, community advocates and academics are invited to discuss cannabis equity in Connecticut and across the country.

“It’s beyond just should we legalize cannabis or not,” said Josephine Cureton ’24, co-head of the YUPP Cage-Free Cannabis advocacy group, in an interview with the News. “It’s thinking about how do we preserve equity in the cannabis industry, how do we make sure especially Black communities and communities that have been harmed by the war on drugs have access to get into the cannabis industry and to be able to consume legal cannabis without the stigma and the racism that has really plagued it for so long.”

The speaker series was created by the YUPP Cage-Free Cannabis advocacy group, which was founded in the fall in partnership with Cage-Free Cannabis. Last semester, they sent out a survey to New Haven residents about their relationships with cannabis usage and law enforcement. Adam Vine, co-founder of Cage-Free Cannabis, was involved in the process. According to Caroline Reed ’24, who is also a co-founder of the YUPP Cage-Free Cannabis advocacy group, while they received many responses, almost all of them came from Yale students, which did not give them a full picture of the community issue — so they pivoted to other outreach programming. They soon came up with the idea to host a speaker series.

Reed said that learning more about drug usage in general would likely “get people in the door” and make them more receptive to learning about systems of equity and legislation.

“College-age people want to talk about drugs,” she said. “It’s exciting and intriguing and I think that it’s a good way to have conversations about incarceration and the war on drugs and all these much bigger, scarier topics.”

The first event, which was held on April 6, was co-hosted by the Yale School of Management’s Business of Legal Cannabis Club. During the talk, Chaney Turner, founder of the People’s Dispensary in Oakland, California and Galen Thomas, founder and owner of Cloud Cups — a Philadelphia-based company that makes CBD-infused gelato — spoke about their experiences as business owners in the growing industry and the barriers they currently face.

Last week, in an event co-sponsored by the Yale Democrats, senior legislative counsel at the Marijuana Policy Project — the nation’s largest marijuana policy organization — DeVaughn Ward discussed recreational and medical cannabis legislation in Connecticut and the country as a whole. The event was especially relevant as the state of New York recently legalized recreational marijuana.

Before working with the Marijuana Policy Project, Ward ran a civil rights law practice that focused on criminal defense for individuals that had been harmed due to poor conditions in Connecticut prisons. Many of the people he encountered had been incarcerated due to cannabis-related offences.

“In my day-to-day practice I really understood and saw the effects of prohibition and how it was preventing folks from going on from leading reasonable and regular lives,” Ward said during the event. “This policy just was wreaking so much havoc in the communities that I was working in … particularly in communities of color.”

Lauren Marks ’23, a member of the YUPP Cage-Free Cannabis advocacy group, told the News that once the group began planning the speaker series, she immediately reached out to Thomas. She said that it was important to her to engage with people directly impacted by the issue, especially as Thomas brought a unique perspective as a Black business owner.

Vine added that he is hopeful, though still critical, about the future of cannabis legislation in the United States.

“Overall I think [cannabis legislation] needs to go in the direction of racial equity, justice and community reinvestment, and I think it is going there,” he said.

The final event in the speaker series, which is about cannabis and the labor movement, will be held next Tuesday. 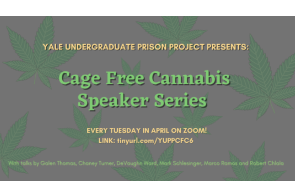