CALIFORNIA CITY — California City emerged Tuesday night as a potential competitive option for cannabis manufacturing and distribution companies to do business after the city council agreed to lower its tax rate on those two sectors.

In an unanimous vote, the rate will be lowered from 6% to 1% for manufacturing and a half-percent for distribution. The council will need to officially approve it by ordinance in April, but the decision places California City closer to Southern California cities who already establish low or no tax rates for the two cannabis sectors.

“The city has embraced the cannabis industry for one reason only — revenue,” City Manager Anna Linn said during Tuesday’s meeting. “The benefits of this potential revenue will ultimately benefit the residents by providing the city a new revenue source … and provide jobs to local residents.”

Linn noted specifically the tax revenue will allow the city to more quickly replace the current special property tax — the city’s main revenue generator — with that earned from the cannabis industry, as was promised to voters in 2017.

“We need to keep all areas of the industry in our town to maximize our potential,” Linn said.

The city council in 2016 allowed all elements of cannabis into the city ahead of California voters’ decisions to legalize recreational adult use and commercialization of the industry. California City voters approved a cannabis business tax in 2017 with the hope that it would one day supplant the property tax that funds the majority of public safety and other areas.

According to, Jason Meister, a local cannabis investor, while Cal City already has a number of cultivators, in addition to two storefronts and a handful of delivery-only retail services, distribution and manufacturing are lacking due to more appealing alternatives in the High Desert and in Northern California.

“We don’t have a lot of development right now specifically in these two categories,” Meister said. “California City has a huge opportunity to take advantage of the cannabis wholesale market.”

He noted Cal City offers plenty of land zoned for such use, water and a favorable climate. But the tax rates kills any buzz. He noted that Long Beach, Adelanto and Cathedral City examined the issue early on and set a low tax rate to entice the industry, which is expected to hit a $7 billion market by 2023. Santa Rosa established a 1% tax rate on manufacturing and doesn’t tax distribution.

“By have the most favorable tax rates in the state, California City has a golden opportunity to become the largest cannabis city in all of California,” Meister said.

Cal City sits on the edge of a prime import region — Los Angeles County and three hours from San Diego, another import region. But it’s either lost manufacturing/distribution businesses due to high tax rates. 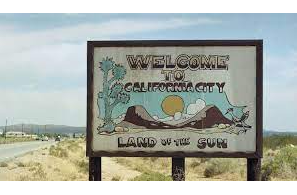