Work on a multimillion-dollar cannabis production facility that was under construction in Winnipeg has been suspended.

The facility is on Warman Road.

Toronto-based MJardin Group Inc. said “In response to market conditions, the company is placing Warman into care and maintenance until further notice.”

It is not clear if the “market conditions” it is referring to is the cannabis market or the financial market.

According to reporting on the matter, MJardin’s former CEO was also involved in scheme whereby Bridging loaned MJardin $35 million and MJardin loaned it back to Bridging.

But the suspension of the Winnipeg operation, a 136,000-square-foot former Maple Leaf Foods meat-packing plant, will leave a total of 17 people out of work. It is not clear how many of those jobs losses are in Winnipeg.

The suspension of the build-out of that plant could have significant financial repercussions for Peguis First Nation.

In October 2019, a joint venture agreement was finalized whereby Peguis would pay MJardin $11 million to acquire the building and MJardin signed a long-term lease. Peguis also agreed to provide $20.5 million to finance the cost of building out the second phase of the production facility.

But Peguis Chief Glenn Hudson said the additional financing was never finalized. The band also owns an undisclosed number of shares in the company.

Hudson said, “Right now Peguis was leasing the property to MJardin through Peguis’ real estate arm. As far as the future of MJardin is concerned, that has not been concluded. Our exposure is that we would lose a tenant of our property.”

Hudson said he understands that work on developing the production facility is at least half finished and suggested that were MJardin no longer to remain the tenant in the building, the opportunity might exist to lease it to another cannabis producer.

MJardin was building a hybrid facility — both indoor and greenhouse production capacity — along with a certified extraction, processing and packaging operation. It was supposed to see the facility reach a production capacity of approximately 4,500 kilograms of high-quality dried flower and 800 litres of bulk oil for use in refined products by the second quarter of 2020.

It had completed the first phase of the project in August 2019, which was to be dedicated to the production of cannabis oil. 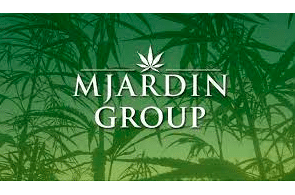