On Monday, lawyers paid by TheraPsil filed papers in a federal court, seeking to compel an answer from Health Minister Hajdu on the issue

The previous exemptions — mostly granted last year, to about three dozen individuals and 19 therapists — usually came through in a few weeks, some in as little as 48 hours.

“What upsets me is that there are 50 other people in this country that have been given the exemption to choose their own path to healing. I am being treated differently which goes against our Charter of Rights and Freedoms,” he said. “And that’s what’s really upsetting me right now because there’s not only myself, but there are other people.”

One of them is Jim Doswell. The 67-year old from Victoria has survived colon cancer and T-cell lymphoma. But he lives with the after-effects of both that battle and some difficult years as a negotiator and a senior adviser to a federal deputy minister.

“I suffer from anxiety and depression and post-traumatic stress disorder,” Doswell said. “I have quite disabling anxiety.”

Two months ago, Doswell applied directly to Hajdu for an exemption to use psilocybin. He’s still waiting for a reply.

“With all due deference to the minister, I don’t need her for this,” Doswell said. “I can go down the street in Vancouver to [black-market] dispensaries and buy this product.”

But, Doswell says, without the minister’s permission, no therapist is likely to help him.

Even some who have an exemption feel as if they’re doing something wrong. In St. John’s, a teacher who was successful says the system for approving the exemptions is opaque and arbitrary, leaving him fearful to reveal his name.

“My biggest apprehension, I guess, is my career,” he confided, because the exemptions seem to be in a grey area — legal only under certain conditions, and because the minister says so.

“I would expect some potential repercussions,” he said.

Neither Hajdu nor spokespeople for Health Canada have been able to explain why the application approvals have stalled.

In a recent statement Health Canada said it is “committed to thoroughly reviewing each request for an exemption … on a case-by-case basis, taking into account all relevant considerations.”

Kruljac isn’t satisfied. On Monday, lawyers paid by TheraPsil filed papers in a federal court, seeking to compel an answer from Hajdu.

TheraPsil’s CEO Spencer Hawkswell says there’s a bigger issue at stake than one person’s ability to legally use psilocybin. 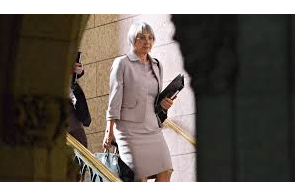