Anna Minten and her husband Emmanuel Levesque Dupere came home from a date night on Friday and immediately  noticed that something was amiss.

All the lights were on in their Revelstoke, B.C., home and their dog was tied up out front. When they went inside, they found doors left open, items out of place and the lock on their back shed busted.

Their tenants told them five police officers arrived at the home at around 7:45 p.m. in three separate police cruisers and searched the property for two hours.

They left a piece of paper on a stool by the front door. It was an RCMP search warrant. The officers were looking for cannabis plants that were “visible from [a] public place.”

Sure enough, the couple’s three pot plants — which they grew legally and kept in the garden behind their home — were gone.

The pair had not been charged as of Tuesday evening, but RCMP say the investigation remains open.

Busted on a charity garden tour

The warrant, which As It Happens has seen, states that on July 28, police had “reasonable grounds for believing that the following offences have been committed: Grown non-medical cannabis that is visible from public place, contrary to Section 56(g) of the Cannabis Control and Licencing Act.”

That’s the date of the town’s annual Garden and Art Tour, a charity event that raises money for the Revelstoke Local Food Initiative.

Minten’s garden was part of the tour.

About 70 or 80 people had waltzed through the couple’s garden that Sunday to look at their raspberries, tomatoes and flowers.

Among them was RCMP Cst. Faron Ling, whose name was on the search warrant, the tour’s other participants told Minten.

According to the provincial cannabis law, a public place is defined as “any place to which the public has access as of right or by invitation, express or implied, whether or not a fee is charged for entry.”

‘I thought I was following the law’

In an emailed statement, Revelstoke RCMP confirmed the search warrant was executed after an off-duty officer and a family member went on the garden tour and spotted “blatant violations” of the province’s cannabis laws.

“The Cannabis Control and Licensing Act was created to ensure the production, possession and distribution of cannabis would be done in a safe and controlled manner. Unfortunately, the violations of CCLA by some of our residents has brought some negative light to Revelstoke and the Garden and Art tour,” Cpl. Mike Esson said.

“By not properly growing cannabis plants, the residents have opened themselves up to the possibility of theft of the cannabis and drugs falling into the hands of youth in our community.”

Minten says she had no idea they were breaking any laws.

Minten’s plants, she said, were kept close to their home, separate from the rest of the couple’s lush garden.

They were roughly 50 metres from the nearest roadway and “mostly surrounded by high bushes, trees, a fence and two houses,” according to Revelstoke Mountaineer reporter Aaron Orlando, who visited the couple’s home and took pictures of their garden.

“I don’t think RCMP in whole are necessarily bad people, but I do think that their actions were unjust, and they could have very easily just come and communicated with me to let me know that I had drawn the line,” Minten said.

“I’m very disappointed with the waste of resources.”

The last communication the couple has had with police was the warrant taped to the stool, she said.

She says other community members who participated in the garden tour are now on edge, as many of them have pot plants of their own. 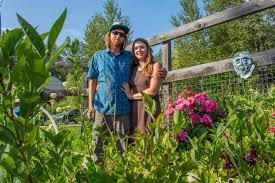