Cannabis as a Sleep Aid: Here’s What You Need to Know

People underestimate the need for a good night’s sleep. But in some cases, people barely get any sleep at all. It’s a common occurrence for grown-ups, with a report of 50-70 million American adults experiencing sleeping disorders. The American Sleep Association estimates about 10-15% experience chronic insomnia, while the tally for yearly cases of insomnia stretches around 40 million U.S. adults.

Given the severity of the numbers, you’d think these people would look for a salve. Well, look no further for the potential properties of Cannabis and how it’s utilized as a sleeping product.

How does cannabis aid in sleeping problems?  Cannabis is a cannabinoid drug with analgesic properties meant to soothe many physical and mental ailments such as restless leg syndrome and PTSD. There are also specific types of cannabis better designed for sleeping aid.

How come it helps promote sleep? Well, to put it simply, the cannabinoids interact with our cannabinoid receptors in the brain, triggering the sleep-inducing adenosine levels to take effect. These functions combined with the properties of cannabis’s compounds such as tetrahydrocannabinol (TBC), which usually acts as a sedative, and low doses of Cannabidiol (CBD), the outcome usually has users feeling drowsy or sedated.

How Is Marijuana Different from Other Natural Sleep Aids?

Manufactured attempts of the Tetrahydrocannabinol (TBC) compound have the potential for preventing large physical side effects derived from many other sleeping disorders.

But since marijuana categorizes as a natural sleeping aid, it lowers the chances of addiction compared to potent synthetic drugs. Natural homeopathic remedies such as these reduce insomnia without acquiring strong side effects.

While it appears to be promising, information revolving around the substance is sparse, requiring more research before being popularized for public consumption.

Where You Live Affects How You Can Use Cannabis. California Law Limitations

The parameters of marijuana usage limitations depend on the state that you live in. For instance, Californian Law Limitations for marijuana use state that 21 years old and older adults may acquire either 1 ounce of dried marijuana or 8 ounces of concentrated cannabis for their consumption. By extension, users may grow as many as six plants per user. Any adults who exceed the given amount can either be fined up to $500 or jailed for 6 months under the charge of misdemeanor.

Where You Live Affects How You Can Use Cannabis. Florida Marijuana Laws

Tips When Using Marijuana for Sleep

We must take note as with all substance usage, it’s very crucial not to overuse them lest we fall victim to addiction and immunity to the substance. So before you begin investing in the medicine as a whole, you must keep in mind the following guide points:

When To Take Marijuana for Sleep?

Marijuana is recommended to be ingested an hour before sleep. Its effects last about 3-4 hours. Those who use the THC strain will feel the effects within ten minutes of consumption.

Which Type of Marijuana is Best For Sleep?

There are two known compounds in Cannabis referred to as Cannabidiol (CBD) and Tetrahydrocannabinol. Among the two compounds, THC is the more recommended strain because of its ability to reduce REM sleep. REM sleep is responsible for vivid dreams or by extension, nightmares. The administration of a THC dose increases the chances of a deep, dreamless sleep– which is beneficial for those inflicted with PTSD nightmares.

How to Ingest Marijuana for a Good Night’s Rest

The methods for marijuana consumption are

The method of ingestion is dependent on your mode of preference. Smoking marijuana is the most common method, those who are concerned with its long-term effect on the lungs can explore alternative intakes. If you’re still testing out what works for you, it’s better to try it during your holidays or weekend breaks instead of during working weeks. 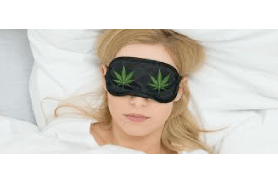