Cannigma Article: Pot in the can: Why can’t inmates get medical marijuana?

“If they’re on opioids, why can’t they be prescribed cannabis?” asked North Wales Police Chief Constable Arfon Jones, adding “at the end of the day, opioids are a damn sight more dangerous than cannabis.”

While there may be common sense to such a proposal, it would border on science fiction in the United States. Federal cannabis prohibition and a culture of law enforcement antagonism has cut off access to medical marijuana for prisons, including in states where it is legal — and even long after inmates leave the prison walls.

Marijuana is currently legal for medical use in 37 states. In 15 of those states, both medical and adult use (recreational) cannabis is legal. On the federal level it remains illegal, however, and is categorized as a schedule 1 controlled substance, meaning it is not classified as having any medical benefit..

This creates a situation where state detention facilities — even where cannabis is legal — do not allow inmates access to medical cannabis because it violates federal law. And because state correctional departments typically receive federal funding, they are not willing to jeopardize that funding.

Like much else with cannabis in the United States today, this has created a confusing set of guidelines for where state and federal law intersect. But federal law is not the only barrier.

Attitudes and norms among law enforcement and corrections officials did not necessarily change along with state cannabis laws. And prisons have far different rules than freer locales.

Pot in the can: Why can’t inmates get medical marijuana? 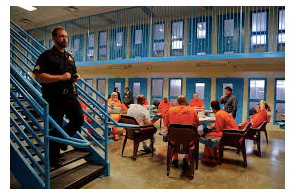