Welcome to our weekly roundup of CBD and hemp-related legal and regulatory news:

A federal judge in New York dismissed a lawsuit against Curaleaf from investors who argued the company misled them about the legality of its CBD products. The investors sued when Mass.-based Curaleaf’s share price fell in 2019 after the USDA sent the company a warning letter for claiming its CBD products could treat a variety of diseases. The suit was among a raft of class-action lawsuits in the past three years challenging CBD makers for allegedly misleading investors and making unfounded medical claims. The Curaleaf case was filed shortly after the FDA sent Curaleaf a warning letter. Hemp Industry Daily

Related: NFL seeks information on CBD and other alternatives to opioids – NBC Sports

After five years at the helm of FDA’s Office of Dietary Supplement Programs (ODSP), Steve Tave will transition to principal advisor in the Office of Regulatory Affairs (ORA), effective March 15. Tave joined ODSP in March 2016 when took over acting director duties. In Dec. 2016, the FDA named Tave the permanent director of ODSP. FDA dietary supplement team member Cara Welch currently ODSP’s deputy director, will step in as acting director after Tave’s departure. Welch, who joined FDA in 2014 from NPA, has served as a senior advisor in ODSP as well as a special assistant in the Office of Policy, Legislation and International Affairs in the Office of the Commissioner. Prior to joining FDA, she was in charge of scientific and regulatory affairs at NPA. Natural Product Insider

Congress re-introduced legislation to compel the FDA to approve CBD – as well as all the other cannabinoids and terpenes within hemp (sans THC) – for use in dietary supplements. The bill, H.R. 841, is called the Hemp and Hemp-Derived CBD Consumer Protection and Market Stabilization Act of 2021. Introduced by Rep. Kurt Schrader (D. Ore.) and Rep. Morgan Griffith (R. Va.), with five Republican and 12 Democratic co-sponsors, the bill would make hemp subject to all the other regulations as for any other dietary supplement, subject to new dietary ingredient (NDI) filings, Good Manufacturing Practices (GMP) and labeling and marketing provisions. It would maintain hemp’s definition as a cannabis plant with less than 0.3% THC. Natural Product Insider

Mount Sinai Medical Hospital selected HempFusion CBD to be used as its exclusive brand and sole supplier in a six-month clinical trial. The trial, comprised of two studies, is being conducted by Dr. David Harnick, a board-certified cardiologist and electrophysiologist and Assistant Professor in Medicine and Cardiology at Mount Sinai, and is one of the first of its kind in the area of CBD’s effect on targeted cardiology markers. Harnick chose HempFusion for its rigors in regulatory standards, toxicology studies for safety and quality control adherence. The randomized, double-blinded, placebo-controlled trial is expected to begin in March 2021. Additionally, HempFusion’s CBD products are part of the ValidCare Human Observational liver and male reproductive toxicology studies, exploring the effect of CBD on liver enzymes. Pot Stock News

CBD Industries, previously known as cbdMD, hit rival Majik Medicine with a suit alleging the company uses an invalid registered “CBD MD” trademark that shouldn’t have been issued in 2017 because its products are unlawful under federal and state drug laws. North Carolina-based CBD Industries alleged that at the time Majik claims to have started using its “CBD MD” mark in Feb. 2016, all cannabinoids were illegal in La., where Majik is based. Majik’s products “were and are” also unlawful under federal drug laws and the federal Food Drug and Cosmetic Act, CBD Industries said. Majik is the owner of the Trademark for “CBD MD” for lotions, creams and oils that contain CBD, as well as medicinal oils and herbs for medicinal purposes, according to the PTO. The mark was registered in March 2017. According to the suit, CBD Industries started selling lotions and creams under the mark as early as May 2017. The company filed a petition to cancel Majik’s registration for its trademark in April 2019, in a case that is pending before the PTO’s Trial and Appeals Board. CBD Industries also alleged Majik’s first-use date for the mark, Feb. 21, 2016, is false. Law 360 (sub. req.)

Hemp industry optimistic about future in the Biden administration

The hemp industry has high hopes for President Joe Biden’s term, with operators seeing opportunities in the president’s climate plan and feeling optimistic that congressional action on high-THC cannabis will open more opportunities for hemp entrepreneurs. With government dollars creating a financial incentive hemp’s environmental aspects could attract interest beyond the flower. Some of the other areas of concern include:

A clear majority of hemp farmers and processors support establishing a federal program to promote the crop, according to a survey by two industry groups, but not everyone supports paying for it. The National Industrial Hemp Council and the Hemp Industries Association polled their members on the question of having a checkoff program, joining the dozen or so U.S. agricultural commodities that already have one. Nearly eight out of 10 hemp growers and processors favor a checkoff program. Six out of 10 farmers and processors surveyed support paying a fee for the program. The USDA, which approves or denies checkoff programs, has said it will not institute one for hemp unless stakeholders at all levels of the supply chain are in favor. Hemp Industry Daily

Humboldt County in Northern Calif. permanently banned outdoor cultivation of low-THC hemp varieties. The unanimous vote by the county Board of Supervisors comes after marijuana interests in the area argued hemp could send male pollen onto higher-THC varieties and depress cannabinoid levels. Humboldt County has had a temporary moratorium on outdoor hemp cultivation since 2018. Many Calif. counties ban or limit hemp cultivation in order to reduce cross-pollination conflicts between marijuana and hemp growers. Humboldt is the first to make its ban permanent. Some states, such as Penn., mandate setbacks between marijuana and hemp farms. In Calif., counties determine how and where the crops can be grown, leading to a patchwork of rules. MJBizdDily

NASDA to vote on whether the federal definition of hemp should contain 1% or less, up from .3%

Members of the National Association of State Departments of Agriculture (NASDA) will vote on whether to support an amendment to the “federal definition of hemp to increase the total THC concentration to 1% or less.” The 2018 Farm Bill, which legalized hemp in the U.S., currently defines hemp as cannabis with .3% THC. When NASDA members meet for their Winter Policy Conference, they will discuss, more specifically, how “increasing the total THC concentration to 1% would allow for use of available seed varieties, provide greater assurance to the producers that they have a viable crop and still places limits on THC concentration,” according to the policy book released ahead of the meeting. Cannabis Wire 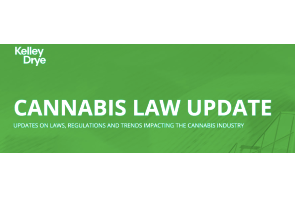