CBD pure hemp tea – what is it and what are the benefits?

CBD pure hemp tea – what is it and what are the benefits?

CBD has become available in a range of forms, from oil to capsules, balm to vape liquid. But an increasingly popular way to enjoy CBD is in the form of tea.

Tea, minus milk, sugar and sweeteners, has been consumed for centuries for its numerous health benefits.

So what can CBD tea offer?

Firstly, it’s important to understand what CBD is and its benefits.

What is CBD and its benefits?

As such, CBD is legal in most countries, while THC is not.

And CBD has been linked to a range of benefits – one being pain relief.

The body contains a system known as the endocannabinoid system which is responsible for regulating functions in the body, including sleep, appetite and pain.

The body produces endocannabinoids, neurotransmitters that bind to cannabinoid receptors in the nervous system.

One study demonstrated how CBD may help reduce chronic pain by impacting endocannabinoid receptor activity. It did this by reducing inflammation and interacting with neurotransmitters.

One of CBD’s most popular benefits is to reduce anxiety and depression.

Anxiety and depression are usually treated with pharmaceutical drugs, but CBD may offer a more natural approach.

In one study carried out in Brazil, 57 men received either CBD (orally) or a placebo 90 minuted before undergoing a simulated public speaking test.

The findings found a 300mg dose of CBD to be most effective at significantly reducing anxiety during the test.

So what are the benefits of taking CBD in the form of tea?

Unlike other CBD products, CBD hemp tea allows people to access the raw plant itself.

The CBD in this raw form also enhances the drinker’s experience of terpenes.

Terpenes are produced by a variety of plants giving them they’re strong odour. Lavender, rosemary and orange blossom are all brimming with terpenes.

In nature, terpenes may protect the plants that produce them by deterring herbivores and by attracting predators of herbivores.

He said: “Mice exposed to terpenoid odours inhaled from ambient air for 1 hour demonstrated profound effects on activity levels, suggesting a direct pharmacological effect on the brain, even at extremely low serum concentrations.”

Dr Russo goes on to explain how these terpenes could help in the treatment of pain, inflammation, depression, anxiety and even epilepsy.

Kanaco pure hemp tea range – what you can expect

Kanaco offers three tea blends with different purposes – all use the best sun-grown hemp flowers along with ceremonial grade tea and are presented in unbleached tea bags.

Kanaco’s Pure Hemp Tea aims to recover the body and mind with 100 percent organic CBD rich hemp and is the strongest of all three teas, containing the most amount of CBD.

Sencha is a type of green tea which undergoes minimal processing and no fermentation, allowing high concentrations of catechins (antioxidants) to be maintained.

Sencha has been shown to help in the fight against heart disease. Research published in “The Journal of the American Medical Associatrion” in 2006 found consumption was linked to reduce incense of death from cardiovascular disease.

Chamomile has been shown to improve sleep quality and relieve anxiety and depression.

One study found people who consumed 270mg of chamomile extract twice daily for 28 days had a third less night time awakening and fell asleep 15 minutes faster than those who didn’t consume the extract.

It does this with the assistance of nettles, passionflower and peppermint.

Nettle has been shown to have a promising effect on blood glucose levels.

In a 2013 study, nettle leaf extract lowered blood glucose in type 2 diabetes patients who were taking insulin as well as oral diabetes medications.

In a clinical trial it was found passionflower had results similar to anti anxiety medication in mice.

Peppermint has been shown in some studies to help alleviate symptoms of fatigue and boost energy levels.

Marcus Cordery, co-founder of Kanaco, recommends the following to get the most out of your CBD tea:

1) With Kanaco’s Pure Hemp Tea being the strongest of the blends, opt for this to alleviate aches and pains after a hard training session.

3) Brew the tea bag for three to five minutes before drinking.

4) Add in a teaspoon of coconut oil for optimum absorption of CBD. 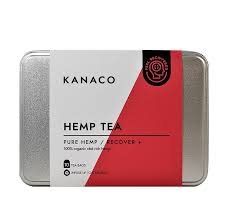