An unsurprising analysis…We are amused by the fact that Vicente Sederberg are happy to push out the information that they came top of the class although we note they are not quite yet prepared to actually upgrade their listing on the Chambers US site !

The usual story…. getting marketing spend out of law firms is like getting blood out of a stone 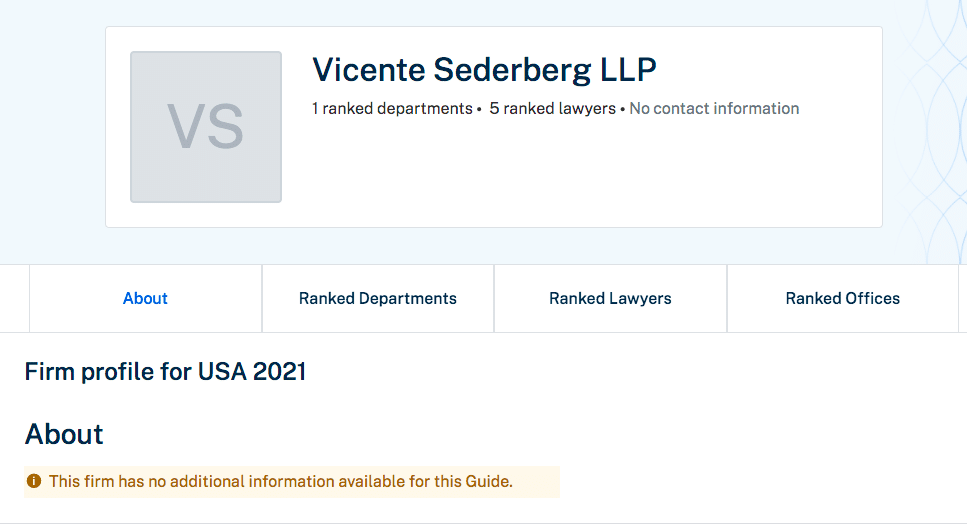 VS and its individual attorneys were also once again ranked among the nation’s leading cannabis law practitioners, including first-time recognition of partners Cassia Furman and Shawn Hauser

BOSTON, DENVER and LOS ANGELES — Vicente Sederberg LLP was awarded “Cannabis Law – Law Firm of the Year” Thursday at the Chambers USA Awards 2021. The firm was one of five on Chambers USA’s “short list” for the award.

Chambers USA, also known as Chambers and Partners, is widely known for its rankings of the leading law firms and lawyers from across the country, which it bases on in-depth market analysis and independent research. The Chambers USA Awards are based on the research for the most recent edition of Chambers USA, and they recognize law firms’ “pre-eminence in key jurisdictions in the country,” according to their website. “They also reflect achievements over the past 12 months including outstanding work, impressive strategic growth and excellence in client service.”

In addition to the award, Vicente Sederberg and its attorneys were once again ranked among the nation’s leading cannabis practitioners in Chambers USA’s 2021 Guide.

The firm received a Band 1 ranking in the Nationwide: Cannabis Law practice category, which it has received since the category was established in 2019. At the individual level, VS founding partners Brian Vicente and Christian Sederbergonce again received Band 1 rankings, and Boston-based partner Charles Alovisetti was once again ranked in Band 2. Two additional partners at the firm joined the rankings for the first time this year. Los Angeles-based partner Cassia Furman received a Band 3 ranking, and Denver-based partner Shawn Hauserwas recognized as “Up and Coming.”

About Chambers USA Awards and Rankings: 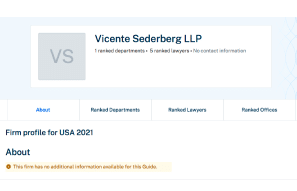