Colorado will impose stricter rules for the purchase of medical marijuana starting Jan. 1 following several months of deliberation over how to execute a new state law meant largely to limit young people’s access to and abuse of high-potency THC products.

Mark Ferrandino, executive director of the state’s Department of Revenue and a former speaker of the Colorado House of Representatives, announced the rules late Tuesday night. He had final say, but received heavy input from state marijuana enforcement officials and a task force that included parents, health professionals and marijuana industry representatives. That task force was formed by the new law passed this year, HB21-1317, that represented the state’s most significant overhaul of marijuana regulations since recreational legalization in 2012.

In the process of passing that bill, the legislature heard stories parents shared about the dramatic effects some marijuana products have had on their children. Parents spoke of psychosis, suicidal thoughts and nonstop vomiting, among other issues, and by the time the legislature was to vote on the bill, nearly all members — 93 out of 100 — were convinced of a need to tighten the law.

Of particular concern to the legislature are products such as wax and shatter that, unlike traditional marijuana flower, are concentrated products made in labs containing much higher percentages of THC — the main psychoactive compound in cannabis — than even the most potent flower.

The new rules, which in limited cases also affect recreational buyers, include:

Dispensaries must enforce the daily purchase limits by inputting patient ID numbers found on medical marijuana cards. Stores are to refuse sale to anyone who seeks to exceed their purchase limit. All data collected must be kept confidential.

Exceptions to the new limits apply only to a patient whose doctor affirms in writing that the patient has a physical or geographic hardship that should allow them to exceed the daily purchase limits, and that the patient has designated a store as the primary place they get their medicine.

An educational resource in the form of an 8×11 paper pamphlet must be provided to customers (medical and recreational) at the point of sale of a concentrate. This pamphlet will include a black dot, smaller than a fingernail, displaying the state’s recommended serving size for concentrates. It will also feature advice on how to safely consume and a list of negative conditions the state declares can result from the use of marijuana concentrate, including psychotic symptoms, “uncontrolled and repetitive vomiting” and “physical and psychological dependence.” The pamphlet will list numbers to various hotlines for people experiencing any of those problems.

Medical marijuana dispensaries are specifically barred from marketing to people under the age of 21. That’s a change from the previous ban on advertising to people under 18. The state considers it a violation if an advertisement appears in a form of media estimated to have at least 28.4% of its audience younger than 21. In advertising concentrates, medical and recreational businesses must both include language approved by the state that warns of the risks of overconsumption.

Ferrandino was not available Thursday to discuss the new rules, a spokeswoman said.

The law that led to the rules also directs the Colorado School of Public Health to analyze existing research “related to the physical and mental health effects of high-potency THC marijuana and concentrates” — and its results could influence future policy decisions at the Capitol.

Denver Democrat Alec Garnett, current House speaker and a lead sponsor of the bill that led to the rules, said he’s confident in Ferrandino’s decisions and that he isn’t planning any new legislation regulating marijuana for the 2022 session, which begins in January, days after the new rules go into effect.

“I would assume it’s a quieter session on this topic,” Garnett said.

The past session was anything but. HB21-1317 was the product of months of meetings and it drew massive bipartisan support from the legislature as well as dire warnings from medical marijuana patients and advocates concerned about restricted access to medicine.

Some of those fears remain, Truman Bradley, executive director of the Marijuana Industry Group, said at a hearing earlier this month when the rules were being finalized. 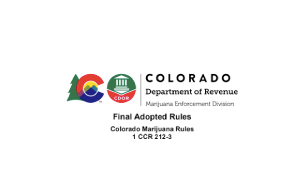