A Colombian man who was once one of the world’s most-wanted drug lords pleaded guilty Wednesday to US smuggling charges, admitting that he led a cartel and paramilitary group that trafficked in cocaine and deadly violence.

“Tons of cocaine were moved with my permission or at my direction,” Dairo Antonio Úsuga, better known as Otoniel, told a Brooklyn federal court.

“There was a lot of violence with the guerillas and the criminal gangs,” he added, and acknowledged that “in military work, homicides were committed”.

Úsuga, 51, could face decades in prison when he is sentenced. Federal sentencing guidelines call for a life term, but the US government agreed not to seek one in order to secure his extradition from Colombia earlier this year, according to US district judge Dora Irizarry. 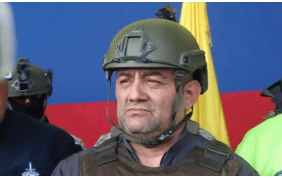