The Bay Area Reporter reveals that two of the largest local cannabis dispensary companies, the Apothecarium and SPARC, have each downsized.

Ryan Hudson, CEO and co-founder of the Apothecarium, whose flagship store is at 2029 Market Street, wrote in an email to the Bay Area Reporter, “The current economic situation due to COVID-19 and San Francisco’s strict rules on social distancing inside retail operations have had an impact on customer traffic at The Apothecarium.

“Even though online orders for delivery and pickup have increased significantly, our business is facing a difficult time,” he added. “Unfortunately, that means we have had to furlough a little more than 20% of our staff because of the current economic situation. We’ve also had to lay off a much smaller number. Twenty-five people total are affected. These were very difficult decisions involving staffers we love and respect. As business returns to normal we hope to welcome back our furloughed staff.”

The Apothecarium was the Castro’s first cannabis dispensary, opening at 2011 at 2095 Market Street as a medical dispensary. Since then, it has donated more than $400,000 in cash to community groups and nonprofits — plus more than $300,000 worth of in-kind donations, according to media consultant Eliot Dobris.

SPARC, which has a large footprint in the Bay Area, has also had to reduce its staff. Founded in 2010 by Erich Pearson, a gay man, at 1256 Mission Street, SPARC was one of the first in the city to incorporate a smoking lounge within its store. It also has two other dispensaries in the city and two in Sonoma County.

In a telephone call with the B.A.R., Michael Bossart, SPARC’s director of strategy and implementation, said that the company has reorganized and eliminated some roles and has also furloughed seven people from its staff of 120. The company’s executive team also took a cut in salaries, he said.

SPARC said the company has seen a huge shift to online ordering, although customers are able to shop in person, one at a time for physical distancing. SPARC has also “beefed up” its website, emphasizing online ordering, he said.

The recent protests of racial violence and the killings of African Americans by police has also taken a toll on both companies. The Apothecarium and SPARC were both victims of robbers who reportedly struck two-dozen dispensaries over the past few days, in protests that turned violent following the murder of George Lloyd by Minneapolis police.

As of Monday, June 1, the Apothecarium said it plans to open all three of its San Francisco locations later this week. Please check the website for the latest updates.

SPARC has closed all shops until further notice for the protection and safety of staff and customers. Check the website for updates. 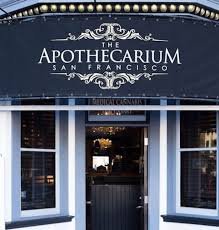