This would be a turn up for the books if it were to be the case. Graham is the consumate political grandee and his ousting would make for some very intereting developments

“I think we should legalize, regulate and tax marijuana like we do alcohol and tobacco,” Jaime Harrison argued this week. “There is simply no medical reason to lock people up over this issue. In essence, this is about common sense.”

The former South Carolina Democratic Party chairman said that the issue is also a matter of criminal justice reform.

“We know that marijuana arrests, including those for simple possession, account for a large number of drug arrests. The racial disparities in marijuana enforcement—black men and white men smoke marijuana the same rates, but black men are much more likely to be arrested for marijuana possession—is just unacceptable,” he said in an interview with CNBC.

Read the full article to undersatnd the ramifications of Graham’s possible ousting.. 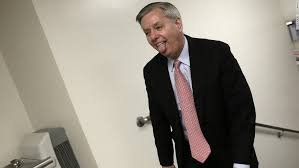