BOSTON (CN) — In a test case for how much control local governments can have over the burgeoning marijuana industry, the Massachusetts high court struggled Monday to figure out if cities and towns can require some dispensaries to operate as nonprofits.

The dispensary in this case “has invested in a facility but now they won’t be able to operate it unless they get a new facility” in another part of town that’s zoned differently, worried Justice Scott Kafker. “Even though they’re completely legal.”

“A not-for-profit has a greater impact on the community than a for-profit?” he asked skeptically.

“I’m still struggling” with the zoning rule, he said. “There is still an opportunity here for folks to operate in the town. … How does it render [the state law] futile?”

With marijuana now completely legal in 17 states and medical marijuana permitted in 19 others, the question of how far local regulation can go is becoming a hot topic nationwide.

Monday’s case involved the town of Mansfield, a community of 23,000 about halfway between Boston and Providence. Most of Mansfield is a quiet suburb but it’s also the site of a 20,000-seat performing arts center. And it sits next door to Foxborough, which regularly attracts more than 60,000 visitors for New England Patriots games.

Ellen Rosenfeld started a nonprofit medical marijuana dispensary in the town at a time when both state law and the town zoning bylaws required such dispensaries to be nonprofit. In 2017, however, the state began allowing for-profit dispensaries, and in 2018 Rosenfeld converted her business to for-profit status.

The state law was intended “to increase access to medical marijuana,” the judge said. And “by limiting medical marijuana facilities to nonprofit entities, the bylaw, while not prohibiting those facilities, does restrict them in a way that the state explicitly determined they should be not be limited.”

That argument interested Justice Frank Gaziano, who said that the state law “specifically takes out nonprofits” and has no requirement as to corporate identity. “But your zoning law does,” he told the neighbor’s lawyer, Benjamin Tymann of Tymann Davis in Boston. “I don’t understand that.”

Tymann replied that, “it’s not as though Mansfield has forbidden medical marijuana dispensaries.” Rosenfeld could easily fix this just by moving or converting back to a nonprofit, he said. “All the municipality has done is to pursue its ordinary zoning functions.” 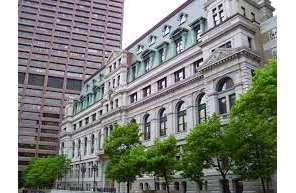