Curaleaf Holdings, Inc. Carlos Madrazo has been appointed to the role of Senior Vice President of Investor Relations

Curaleaf Holdings, Inc. (CSE: CURA /OTCQX: CURLF) (“Curaleaf” or the “Company”), a leading U.S. provider of consumer products in cannabis, today announced that Mr. Carlos Madrazo has been appointed to the role of Senior Vice President of Investor Relations and Capital Markets for Curaleaf, a new position.

Mr. Madrazo will work with Curaleaf’s Executive Leadership Team to help advance the knowledge and understanding of the Company’s strategic positioning within global cannabis and consumer packaged goods markets, the Company’s successful track record for growth and execution, as well as the value creation opportunity for shareholders. Mr. Madrazo will also assist in corporate finance and strategic planning matters.

“We are truly excited to welcome Carlos to the Curaleaf team as we continue our expansion into new markets domestically as well as internationally following our recently announced agreement to acquire EMMAC Life Sciences Limited, the largest vertically integrated independent cannabis company in Europe,” said Joseph Bayern, Chief Executive Officer of Curaleaf. “Carlos brings a global financial market mindset and a significant career experience to our team that will enhance our communications and engagements with investors around the world, particularly as we expand our shareholder base. Carlos joins us at a pivotal time for Curaleaf and the industry as consumer and political liberalization trends around cannabis continue to gain substantial momentum worldwide. I look forward to working closely with Carlos to propel Curaleaf forward in its next phase of growth.”

“I am honored to join Curaleaf at such an important moment and to work with true pioneers and transformers in the industry,” said Mr. Madrazo. “Building on Curaleaf’s recently announced expansion into the international cannabis market, I am excited for what the future holds for the Company. It is my privilege to be a part of Curaleaf’s mission and to expand the knowledge among the financial community of the Company’s vision for the future and its extraordinary potential.”

Mr. Madrazo has over 20 years of experience in investor relations, investment banking and operations at an international level. Most recently, he led Investor Relations and Sustainability for Grupo Televisa, S.A.B. (“Televisa”), a media and telecommunications conglomerate trading on the NYSE. Prior to Televisa, Carlos held positions with Tutv Llc as CFO, where he launched and co-managed a new business venture and with ING Barings, where he led Latin American media and entertainment investment banking. Carlos also spent six years with Chase Securities in its Global Mergers and Acquisitions Group. He holds an MBA from the University of Notre Dame and a Bachelors of Arts degree in Economics. 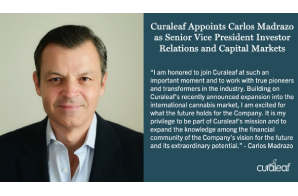