De Blasio Tells State To Get On With Implementing Regulated Cannabis

The mayor said at a news conference Tuesday that he thinks the state government is moving too slowly at implementing a system for legalized marijuana after passing it and signing it into law earlier this year.

“The State of New York needs to get in gear here,” the mayor said. “We had a big, long multi-year discussion over legalizing cannabis. We saw the state Legislature act. Now the state needs to do something about it. They still haven’t. So the state, the governor’s not named executive director for the Office of Cannabis Management, has not named appointees to the Cannabis Control Board…it is time for the state to wake up and do its job on this really important issue.”

The mayor also slammed the state for failing to move forward on congestion pricing, too, which has been a controversial issue for New Yorkers, though the plan is set to move forward. The timeline is unclear.

At the time marijuana legalization was signed into law, it was clear the process would be arduous: the state had said it needed time to establish regulations as well as a cannabis board that will oversee the recreational market.

The law allows recreational sales of marijuana to begin April 1, 2022, however, lawmakers have warned it may take longer to bring the market to scale. 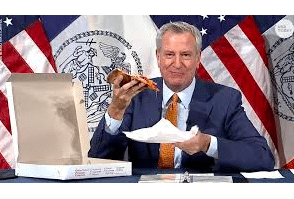