A pair of senators representing Oregon sent a letter to the Drug Enforcement Administration (DEA) on Thursday to demand changes to the agency’s proposed hemp regulations.

This is the second congressional request DEA has received on the subject this week, with a group of nine House members similarly imploring a revision of a rule concerning hemp extractions on Tuesday.

DEA released an interim final rule (IFR) for the crop in August, and it said the regulations were simply meant to comply with the 2018 Farm Bill that legalized hemp and its derivatives. But stakeholders and advocates have expressed serious concerns about certain proposals, arguing that they could put processors at risk of violating federal law and hamper the industry’s growth.

Sens. Ron Wyden (D-OR) and Jeff Merkley (D-OR) said in the new letter that despite DEA’s claim that its IFR is only about compliance, the proposal “does significantly more.” 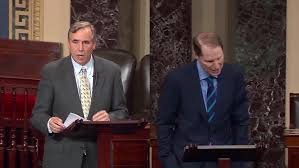