Ever wonder how LSD works? UNC School of Medicine researchers say they know the answer

Shortly after Albert Hofmann’s famous bicycle trip—the Swiss chemist’s harrowing ride home after accidentally dosing himself with the then-unknown LSD-25—his laboratory, Sandoz, shipped this peculiar substance to any researcher willing to investigate its potential uses. Hoffman is responsible for dosing the planet with this ergoline derivative, as well as all the creativity and rituals that have sprung up around it.

Nearly eight decades and many thousands of studies later, researchers have been unable to identify the chemical responsible for LSD’s unique results. We know that tryptamine derivatives like LSD and psilocybin bind to serotonin-2a receptors, resulting in the “mystical experience,” as well as serotonin-1a receptors, which cause feelings of contentment. How LSD accomplishes its magical feats, though, have remained a mystery.

A little piece of that mystery appears to have been solved, thanks to a new study, published in the journal, Cell. Lead author, Bryan Roth, a professor and pharmacologist at The University of North Carolina School of Medicine, says decades of targeted research on LSD have now come to fruition.

Hundreds of clinical trials on psychedelics occurred in the fifties and sixties before this class of substances got caught in the crosshairs of a racist political front. Even the government was experimenting with psychedelics. The notorious Project MKUltra lasted for two decades, with an unknown number of Americans—the homeless, minorities, immigrants—unknowingly dosed with LSD so researchers could observe its behavioral effects. 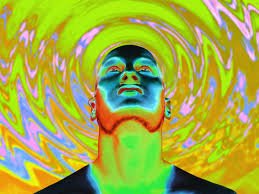