A California Democratic Party leader who was central to a wide-reaching corruption investigation in Anaheim involving the proposed sale of Angel Stadium has agreed to plead guilty to attempted wire fraud, the U.S. Department of Justice said Thursday.

Melahat Rafiei, 45, previously secretary for the California Democratic Party and a member of the Democratic National Committee, was a well-known political consultant in Orange County.

In late 2019, according to a plea agreement filed in federal court Thursday, Rafiei told a commercial cannabis company owner that she would work to pass a marijuana-related ordinance in Anaheim that would benefit the business, in exchange for a payment of at least $300,000.

What she didn’t tell the client was that she was already working on an ordinance on behalf of other people. 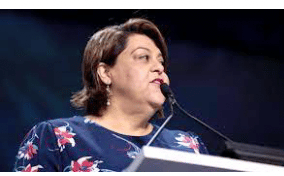