TALLAHASSEE — A high-profile effort to legalize marijuana was all but killed by the Florida Supreme Court Thursday.

In a 5-2 decision, justices ruled a Constitutional ballot initiative by the group Make it Legal Florida to be “misleading.” The ruling came after Attorney General Ashley Moody asked the justices to advise whether the potential Constitutional initiative would be suitable for a future ballot.

Make It Legal’s proposal would have left it up to Florida voters to decide whether to allow Floridians older than 21 to possess and use up to 2.5 ounces of marijuana. The initiative’s sponsor, backed by the Florida medical marijuana industry, had raised $8.2 million for the effort. They had also gathered more than 556,000 signatures out of the 891,589 needed for the measure to make the 2022 ballot.

Had it made the ballot, the initiative would have needed 60 percent of the vote to be added to the state Constitution.

If they want to make a future ballot, Make It Legal Florida would now have to redraft their amendment and start from scratch.

Make It Legal’s attorney, George Levesque, referred a request for comment to Nick Hansen, the organization’s chairman. Hansen did not respond to requests for comment.

In an unsigned opinion, five of the seven justices took issue with Make it Legal Florida’s use of the word “permit” in their initiative’s ballot summary. The justices argued that the amendment did not effectively advise Floridians that although marijuana use would be allowed under state law if the amendment were to pass, it would still be illegal federally.

Similar issues have previously come before the Florida Supreme Court. When it was considering whether to allow an amendment legalizing medical marijuana onto the 2016 ballot, the backers of that initiative avoided this pitfall, Canady wrote. The sponsors of the 2016 measure noted in their ballot summary that their initiative did not “immunize” Floridians from “violations of federal law.” 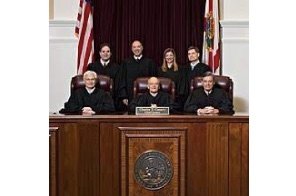