The Florida Senate is using a controversial new law to try to bolster arguments against a proposed constitutional amendment that seeks to allow people to use recreational marijuana. Reports  The Miami Herald.

Lawyers for the Senate and other opponents have argued in recent months that the Florida Supreme Court should block the proposed amendment because it would conflict with federal laws that make marijuana illegal.

But in a filing Saturday, the Senate ratcheted up that argument by pointing to part of a new state law that seeks to make it harder to pass ballot initiatives. That part of the law calls on the Supreme Court to consider whether proposed amendments are “facially invalid under the United States Constitution.”

The filing Saturday by Senate attorneys said the law, which was signed recently by Gov. Ron DeSantis, is “relevant” to the broader argument about the recreational-marijuana amendment conflicting with federal laws. On Monday, the Supreme Court responded by issuing an order inviting the parties in the recreational marijuana dispute to “file supplemental briefs addressing the implications, if any, of” the new law. 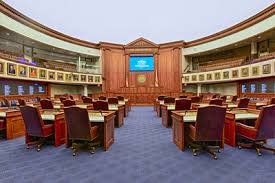