As many are well-aware, the hemp cannabinoid marketplace has been one of shifting and evolving regulatory oversight. For instance, the 2018 Farm Bill, while vesting primary regulatory oversight for the cultivation and processing of hemp with the United States Department of Agriculture, in turn authorized States to implement their own hemp regulatory programs. While state-based Departments of Agriculture have taken primary regulatory authority overseeing the cultivation and production of hemp extract, a more recent trend is for state Departments of Health to regulate the infusion and sale of products intended for human consumption.

New York, in turn, has implemented one of the most robust hemp cannabinoid regulatory constructs, not only vesting regulatory oversight of the hemp cannabinoid marketplace with New York’s Department of Health (“DOH”) (and soon, the Cannabis Control Board), but also affirmatively requiring licensure for anyone that manufactures, distributes, and sells hemp cannabinoid products into New York State. Indeed, New York has made clear that regardless of whether an entity is simply distributing cannabinoid hemp products manufactured out-of-state to in-state retailers, that out-of-state distributor must be licensed with the DOH. Similarly, the DOH has also made clear that even an online retailer who makes a sale to a New York resident – conducting no separate and distinct business within the State of New York – must also be licensed with DOH. Failure to do so contains penalties, including, but not limited to, a complete bar on sales within the State.

Beginning in February 2021, the DOH began issuing retail and distribution licenses, albeit subject to the express caveat that “cannabinoid hemp products sold will not need to conform to the pending regulations until they are in effect.” While the updated regulations issued today, May 19, 2021, are not in final form, they nevertheless directly respond to, address, and in many material instances, revise the proposed regulations related to products, labeling, and licensing due diligence.

As it relates to products, the updated regulations both amend restrictions related to certain products, while affirmatively banning others. For instance, and in light of a wave of companies beginning to sell Delta-8 THC products, the DOH clarified that hemp cannabinoid products sold in New York may “not contain synthetic cannabinoids, or cannabinoids created through isomerization, including [Delta] 8-tetrahydrocannabinol and [Delta] 10-tetrahydrocannabinol.” In other instances, New York reversed prior regulatory bans on products, including as it relates to hemp flower, due in large part to the advocacy of hemp cultivators in New York. However, even this reversal came with renewed regulatory caveats, including that “cannabinoid hemp products clearly labeled or advertised for the purposes of smoking, or in the form of a cigarette, cigar, or pre-roll, or packaged or combined with other items designed to facilitate smoking such as rolling papers, are prohibited.”

As it relates to labeling, New York removed certain font based restrictions, and in other instances, revised prior guidance on specific warnings. For instance, one such rule requires a warning that the product may contain THC which could result in a failed drug test. However, the DOH revised this warning and identified that it “may be omitted for cannabinoid hemp products that are: topically applied; made exclusively using an ‘isolate;’ or made from ‘broad spectrum’ hemp extracted directly from hemp grown, extracted, and manufactured in New York State.”

As it relates to licensing due diligence, the State reiterated that manufacturers and retailers are required to ensure that all cannabinoid hemp and hemp extracts be manufactured in accordance with cGMP pursuant to 21 CFR Parts 111 or 117. In particular, the DOH noted that it received numerous comments inquiring as to how the State planned to enforce this requirement for those products manufactured out of state. However, the DOH made plain that “[o]ut-of-state manufacturers and distributors of cannabinoid hemp products must adhere to the requirements of the program, to the extent they intend to sell products in New York State.”

In short, the above is just a sampling of relevant changes that came along with 111 pages of updated regulations issues today. But even as the preceding hints at, New York is a market with very specific requirements, and, in turn, very definitive penalties for non-compliance. 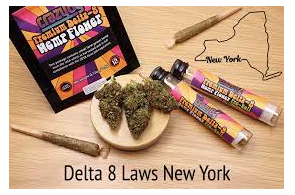