As it is Sunday here at CLR we thought it would be a good day for some geopolitics about the lesser known world of hashish smuggling, Morocco & the Western Sahara (Mauritania) from the Organised Crime & Corruption Reporting Project .

Recognition bolsters the kingdom’s claim to the territory, but experts say it will not affect UN or EU positions.

While the Trump administration’s recognition of Moroccan sovereignty over Western Sahara is a big victory for the North African kingdom, experts say the move is unlikely to result in widespread support for Morocco’s claim to the territory.

Moroccan forces and the Polisario Front, an armed group demanding independence for Western Sahara, have been fighting over the disputed territory – a vast area bordering Morocco, Mauritania and Algeria that was previously under the Spanish control – for decades.

What’s Biden doing about it ….  nothing at the moment

There are no signs that the Biden administration intends to roll back the Trump administration’s recognition of Western Sahara as part of Morocco anytime soon.

Why it matters: Trump’s move on Western Sahara was a dramatic shift in U.S. policy. Undoing it would damage relations with Morocco and could cause Rabat to reverse its promise to resume diplomatic relations with Israel, made as part of the deal with Trump.

The big picture: Western Sahara is a sparsely populated, disputed territory that borders Morocco on the northwest corner of Africa. It was formerly controlled by Spain and is now claimed by Morocco despite international opposition and resistance from the indigenous population.

The state of play: The Western Sahara decision is among several Trump policies that are under review at the State Department.

Driving the news: A bipartisan group of 27 senators led by Jim Inhofe (R-Okla.) and Patrick Leahy (D-Vt.) signed a letter last week urging Biden to roll back the Western Sahara decision. In the letter, they claimed:

“The abrupt decision by the previous administration … was short-sighted, undermined decades of consistent U.S. policy, and alienated a significant number of African nations. We respectfully urge you to reverse this misguided decision and recommit the United States to the pursuit of a referendum on self-determination for the Sahrawi people of Western Sahara.”

Tensions remain high in the contested North African territory of Western Sahara ever since an incident at the end of last year threatened to break the 30-year ceasefire and disturb the established drug trade routes.

Hashish has long been smuggled through Western Sahara to West African markets (Photo: 245 U.N. troops)The long-running conflict between Morocco and the Algerian-backed Polisario Front – which after enduring Spanish colonial rule until 1975 demanded an independent state for the Sahrawi people – threatened to re-ignite in November 2020 when members of the Polisario Front entered the border town of Guerguerat, a U.N.-occupied buffer zone between Morocco and Mauritania.

The move caused a geopolitical incident that disrupted the flow of goods to west Africa as Polisario members blocked the usual trade routes. Absent reaction from the 245 U.N. troops in the buffer zone, the Moroccan military swiftly moved in and briefly took control.

Yet since their withdrawal, the increased presence and alertness of Moroccan troops on the border zone has disrupted the traditional flow of one of the region’s major commodities: cannabis resin or “hashish”.

Mass cannabis cultivation in Morocco’s Rif Mountains makes it one of the drug’s largest exporters and while the high-quality product mostly goes to Europe, the majority of the lower-quality hashish travels through southern Morocco and Western Sahara to feed drug markets in the Sahel via Mauritania and northern Mali, says Raouf Farrah, Senior Analyst at the Global Initiative.

“As an organization, the Frente Polisario is not implicated in drug trafficking,” he told the OCCRP, but explained that some Sahrawis close to Polisario fighters were involved.

The possibilities of elite capture of hashish trafficking have also been reduced by the regional market’s democratization over the last five years. Before that, hashish trafficking was monopolized by a few communities, such as Lahmar Arabs in northern Mali with connections in Moroccan and Arab Mauritanian traffickers, he said.

Now, a growing number of actors having sought new partners, small-scale hashish trafficking of 50 to 100 kilograms is accessible to anyone with, say, a commercial company registered in Casablanca that exports food to West Africa, according to Farrah.

As for cocaine transiting North Africa for Europe, that is a different matter altogether.

“Cocaine is definitely passing through the broader region, but it requires much more sophisticated arrangements than hashish even though the corridors of trafficking are similar and stable,” Farrah says.

“The last seizures in Morocco indicate that big volumes of cocaine are moving towards the coast of southern Morocco and Western Sahara. Ports like Dakhla and Laayoune are strategically located for illicit economies,” he notes.

This tends to focus on re-containerization: throwing off customs in destination countries by moving cocaine loads from one container to another. In the past, the desert land road may have been used but instability, violence and competition over convoys across the Sahara-Sahel means maritime shipping from northwest African ports is now the cocaine trafficker’s preferred modus operandi. 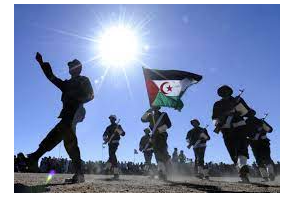