State Sen. C. Scott Grow, R-Eagle, introduced a constitutional amendment Monday that would put the prohibition in the Idaho Constitution instead of just code, which would make it more difficult to legalize psychoactive drugs in the future.

This new section of the constitution would ban “the production, manufacture, transportation, sale, delivery, dispensing, distribution, possession, or use of a psychoactive drug” unless it’s approved by the Food and Drug Administration and lawfully prescribed.

Grow said the point is to prevent the “erosion” of such laws in Idaho’s code. He criticized states that recently legalized drugs and said that if Idaho follows their lead, the state would jeopardize its “values and way of life.” Grow has a long list of Senate co-sponsors behind him, including Senate President Pro-Tem Chuck Winder.

“Neighboring states have legalized controlled substances to the detriment of their children, families and communities,” Grow said. 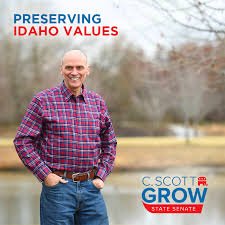