An Illinois judge has ruled against more than three dozen applicants for craft cannabis cultivator licenses who filed suit against the administration of Gov. J.B. Pritzker for a delay in awarding the licenses. The craft grower licenses were supposed to be awarded by July 1 of this year to comply with state law, but state officials have not yet done so, citing delays necessitated by the ongoing coronavirus pandemic. The delay has affected the issuance of 40 craft grower licenses, as well as licenses for cannabis infusers, transporters, and 75 additional recreational cannabis retailers, which were supposed to be issued by May 1.

Cook County Judge Allen Walker issued the ruling on December 24 in the suit brought by the Illinois Craft Cannabis Association, which sought a decision directing the Pritzker administration to issue the licenses immediately. In the ruling, Walker wrote that the first emergency order issued by Pritzker to delay awarding the licenses was insufficient. But the judge also ruled that a subsequent order issued by the governor that clarified the delay was ordered because the agency tasked with issuing the licenses, the Illinois Department of Agriculture, was focusing its efforts during the pandemic on protecting the food supply, including livestock and meat production facilities.

“While (the later order) does not explicitly say: ‘IDOA’s issuing cannabis licenses by the (deadline) would have the effect of diverting needed resources from the pandemic effort thus making it more difficult for the governor to cope with the COVID-19 crisis,” Walker wrote in the order, “that is the point implicitly being made.”

The craft growers trade association filed suit against the Pritzker administration for the delay, citing mounting costs for applicants to rent and maintain facilities for their proposed cannabis operations. The suit claims that Pritzker’s order is unlawful because it failed to identify a sufficient legal basis for the delay and did not set a new deadline for the issuance of the licenses.

In addition to seeking immediate issuance of 40 craft grower licenses, 40 cannabis infuser licenses, and an unlimited number of transporter licenses as specified by state law, the suit seeks allowances for applicants who have lost business sites, employees, or other factors of their licensing plans because of the pandemic.

Paul Magelli, a spokesman for the Illinois Craft Cannabis Association, said the group is “considering an appeal given the weakness of the judge’s order.”

“We plan to decide early this week,” Magellis added.

Although the Pritzker administration has yet to announce when the licenses will be awarded, it issued a statement about the delay in October after the suit was filed.

“The COVID-19 pandemic and the extension of the application deadlines have led to an extension of the scoring process,” said Pritzker spokesperson Charity Greene. “The Department of Agriculture remains committed to ensuring that scoring of applications is conducted in a fair and equitable manner and is currently in the final stages of completing the scoring process in accordance with the Act and rules. The Department will announce the date licenses will be awarded in the near future.” The Illinois Craft Cannabis Association (“ICCA”) filed suit against the State of Illinois and Illinois Department of Agriculture on Monday, October 12 to compel the defendants to issue overdue licenses and provide injunctive relief to the cannabis craft grower, infuser and transporter applicants that were expecting licenses to be issued on July 1, under the law, but are now racking up millions of dollars in rent, payroll costs and fees. David S. Ruskin and Julianne M. Dailey are representing the ICCA in the litigation.

The ICCA is a member-founded, member-led, business-focused association for Illinois craft cannabis grower, infuser and transporter licensees, applicants and prospective applicants. They are focused on research, education and advocacy, cultivating a diverse, equitable, sustainable and professional craft cannabis sector that ensures quality and choice for Illinois consumers.

“Every day that passes without the licenses being awarded causes significant ongoing damage to the license applicants,” the ICCA said in the complaint for a writ of mandamus filed in Cook County Circuit Court.

The State of Illinois is significantly beyond its statutory obligation to issue licenses by July 1, 2020 as defined in the Cannabis Regulation and Tax Act (410 ILCS 705). 455 craft grower applicants and 115 infuser applicants have seen their process hijacked by improper delay. Unlike the dispensary licenses (mired in their own separate litigation), the growers and infusers were required to have secured through purchase or lease a specific property prior to submitting their applications in April, causing many to now spend $10,000 or more a month to maintain that property without knowing when the licenses will be awarded, or if they will get one at all.

The State has failed to provide any communication to applicants that have invested upwards of $100 million in their license applications in total. Moreover, the State’s delays mean that eventual licensees are losing approximately $40 million in revenue for each month of delay that can never be recovered, totaling more than an estimated $120 million since July 1, 2020 and the State will lose nearly $12 million per month in badly needed excise tax revenue for each month it delays.

In addition to asking for immediate issuance of craft grower, infuser and transporter licenses with the scoring, ICCA is also asking for uniform relief for all applicants that have lost, or are at risk of losing, their property, zoning and/or staff or are impaired in their ability to become operational within six months following licensing due to the State’s delays.

You can read more about this lawsuit on the ICCA’s website or on Law360 (subscription required). 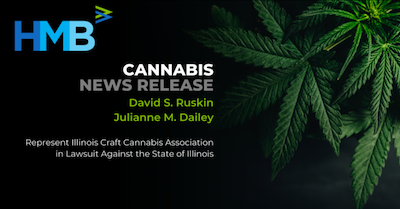