Italy: Pharmacies, cannabis and shipment of preparations: the TAR decides not to decide

Pharmacies and shipment of cannabis-based preparations: the TAR decides not to decide: the pharmacist can operate as he sees fit with the risk of undergoing a criminal or administrative dispute.

The update comes from Dr. Marco Ternelli, one of the pharmacists who had resorted to the TAR after the ministerial circular which, among other things, wanted to ban the shipment of cannabis-based preparations. 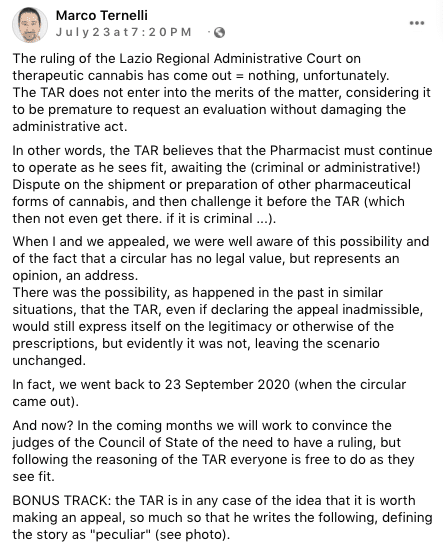 In all pharmacists who participated in the appeal are 16 , is one of them is Dr. Marco Ternelli , which Cannabisterapeutica.info had pointed out: “We have tried to appeal not to create chaos or unnecessary controversy, but simply because the standard is clear . In any case, the appeal contains all the examination of the various reasons. It should be noted that this is a ministerial note. The note – Ternelli recalls – is a non-binding individual opinion, an interpretation ”. Not a law.

Today the doctor explains that: “The TAR does not enter into the merits of the matter, considering it is premature to request an evaluation without damaging the administrative act. In other words, the TAR believes that the pharmacist should continue to operate as he sees fit , awaiting the (criminal or administrative) dispute on the shipment or preparation of other pharmaceutical forms of cannabis, and then challenge it before the TAR “, or go to trial in case of criminal charges.

“When I have and we have appealed, we were well aware of this possibility and of the fact that a circular has no legal value , but represents an opinion, an address. There was the possibility, as happened in the past in similar situations, that the TAR, even if declaring the appeal inadmissible, would still express itself on the legitimacy or otherwise of the prescriptions, but evidently it was not, leaving the scenario unchanged “.

However, being a problem of fundamental importance for patients, it was certainly worth it and the point in favor is that the TAR still recognizes the right of the pharmacist to operate as he believes. The paradox is that when faced with a norm that does not exist, the state tells a citizen to commit a possible infringement and then eventually have justice later.

In short, according to the pharmacist, “in fact we went back to 23 September 2020” (when the circular came out). And now? “In the coming months we will work to convince the judges of the Council of State of the need to have a ruling , but following the reasoning of the TAR everyone is free to do as he thinks”, thus taking risks.

It should be pointed out that the TAR has in any case decided to compensate for the costs of the dispute, defining the affair as “peculiar”. We will update you on any developments. 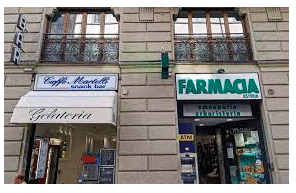