ITV News Report: How Britain’s crown dependencies plan to cash in on cannabis 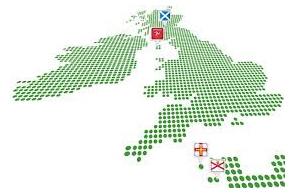 Just miles off the coast of the UK, Britain’s crown dependencies smell opportunity in the air.

Typically known for their tax-friendly regulation and as an outpost for wealthy entrepreneurs, the Isle of Man, Jersey and Guernsey have all introduced new legislation allowing for easier investment in a new and emerging market – medicinal cannabis cultivation.

In January, the Isle of Man’s parliament approved plans to sell licences to grow and export cannabis for medicinal use. As a crown dependency, like both Guernsey and Jersey, it is self governing – meaning it does not need to wait for permission from the UK government.

Enterprise minister Laurence Skelly said new regulations on cannabis cultivation had been a “long time coming”. He’s hoping the island can steal a march on the UK.

“We want to make sure it [medicinal cannabis] is a high quality product so we’re at the top end of the market and we’re attracting the right investment. We’ve put the framework in place and already the interest has been fantastic,” he said.

“All we’ve done is managed to accelerate things but competition will come along, whether from the UK or elsewhere. What we’ll try and do is carve out a niche market that’s at the high end of the market. We’re a small nation but we’re a diverse economic community.”

Dozens of firms, both overseas and locally, have enquired about setting up on the island. One local entrepreneur is already planning to build a 150,000 square foot indoor premises to grow medicinal cannabis. Other firms could also be up and running as early as this year.

“If we need to create legislation which suits an industry that we think will benefit us, we’ll do that,” Mr Skelly said. “The regulation is key to our success.”

Mr Skelly said one firm had enquired about setting up inside the Isle of Man’s ‘airport technology gateway’, connecting it to the island’s freeport. In turn, this would mean the business would not pay import, export and excise duty, helping to reduce costs and making it a more competitive.

Freeports were a key policy pledge at the Budget earlier this year, but the Isle of Man has had an operating freeport for several decades, making it an attractive proposition for businesses looking to enter the market now while saving on costs.

“As I see it, it’s another opportunity to facilitate easy access and low-level bureaucracy to enable businesses to do what they do well,” Mr Skelly said.