In Indianapolis on January 29, a quiet, eager audience of nurses give their rapt attention to Jason Straw as he takes center stage at the 2020 ISNA Policy Conference. Straw is a retired USAF Critical Care Air Transport nurse who has served in combat.

Now, he is the Vice-Chair of Indiana NORML— an organization who is currently focused on changing cannabis laws for the access to Medical Cannabis as therapeutic treatment in Indiana. 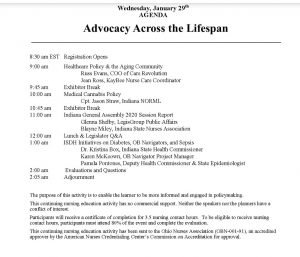 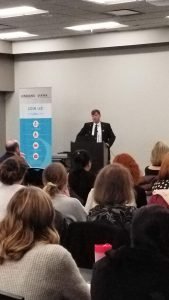 Straw is here to present his academic work on the “Therapeutic Use of Marijuana and Related Cannabinoids,” highlighting the absolute basics of Cannabis use, dosing, effects, and internal mechanisms.

He begins with the question:

How many of you were taught about the Endocannabinoid System in Nusing school?

In a crowd of approximately 75 nurses, only 3  hands go up. Straw uses this educational-hole opportunity to smoothly segue into his thorough educational presentation as found below:

ABSTRACT: Therapeutic Use of Marijuana and Related Cannabinoids

The purpose of this statement is to reiterate the Indiana State Nurses Association’s (ISNA) support for the review and reclassification of marijuana’s status from a federal Schedule I controlled substances to facilitate urgently needed clinical research to inform patients and providers on the efficacy of marijuana and related cannabinoids.

Therapeutic Use of Marijuana and Related Cannabinoids—

The findings of anecdotal and controlled studies regarding the efficacy for patient use are mixed. Current federal regulations impede the research necessary to evaluate and determine the therapeutic use of marijuana and related cannabinoids.

This position statement does not extend to the current debate on the legalization of marijuana for recreational purposes. The goal is to develop an evidence-based approach to its use in the treatment of disease and symptom management.

Recommendations “It is the shared responsibility of professional nursing organizations to speak for nurses collectively in shaping health care and to promulgate change for the improvement of health and health care” (ANA, 2015, p. 36).

“Marijuana and related cannabinoids are widely used to treat disease or alleviate symptoms, but their efficacy for specific indications is not clear (Whiting et al., 2015). Marijuana has been used for alleviating symptoms of nausea and vomiting; stimulating appetite in HIV patients; alleviating chronic pain; easing spasticity due to multiple sclerosis; decreasing symptoms of depression, anxiety, sleep disorders and psychosis; and relieving intraocular pressure from glaucoma (Whiting, 2015).

Marijuana was widely prescribed in the United States until 1937 when the Marihuana Tax Act of 1937 prohibited its use (Musto, 1972). By 1970, the Controlled Substances Act made marijuana illegal.

“ISNA recommends additional scientific research of marijuana and its related cannabinoids in order to guide evidence-based practice for therapeutic use in patients.

Thirty-three states and the District of Columbia have legalized the use of marijuana for some medical purposes. Despite this, the United States Supreme Court voted that Congress had the legal authority to criminalize the use of home grown marijuana even in states where it is legal for therapeutic purposes (Gonzales, 2005).

As a result, patients and families who gain access to or use marijuana for therapeutic purposes in a state that allows for its use are still at risk for criminal consequences.

ANA actively supports patients’ rights to legally and safely use marijuana and related cannabinoids for therapeutic symptom management, as well as the nurse’s promotion of quality of life for patients using such therapy.”