The head of the U.S. Senate Banking Committee threw cold water on hopes for speedy action in the upper chamber on a major marijuana banking reform bill the U.S. House of Representatives passed this week in a bipartisan vote.

Sen. Sherrod Brown, an Ohio Democrat, told reporters Wednesday he’s interested in the legislation – known as the SAFE Banking Act – but he doesn’t yet back it “because I think we need to look at a number of things,” Cleveland.com reported.

Brown said he’s brought the bill up with Senate Democratic Leader Chuck Schumer, “and will see where it goes.”

“This committee’s been too much about Wall Street and not enough about housing, not enough about rural and urban affairs and people’s everyday economic lives, and that’s my focus,” said Brown, according to Cleveland.com. “I will look at this seriously. We’re not ready to move on it.” 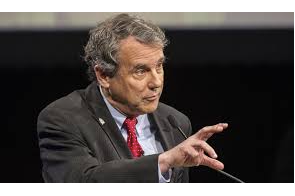