The year has seen numerous robberies in The Emerald Triangle, Sacramento, Oakland, Los Angeles, and all points in between. These have included stick-up kids getting away with 20 pounds of flower with a retail value of $156,000 and the cracking of a  safe by someone a bit more technically adept in a separate incident. That latter effort was said to score $161,000 destined to be taxes. Sacramento industry insiders say two places were hit in the same night.

“Last year a delivery service in Sac was robbed of $250k worth of product. When they called police and it was on a weekend, they sent out a volunteer to take fingerprints,” said Jacqueline McGowan, founder of 8,000-strong California — City & County Regulation Watch Facebook group. “They didn’t care that the company had video of the robbers including pictures of their cars and license plates. Would a jewelry store owner have been told that detectives don’t work on weekends?”

Sacramento is also home to the California Bureau of Cannabis Control. We reached out to the state to ask if they keep an eye on how the policies being developed in Sacramento are  impacting public safety across the state; the BCC told L.A. Weekly they do not compile that data.

Read the full article at  https://www.laweekly.com/thieves-target-pot-industry-across-california-and-l-a-in-new-crime-wave/ 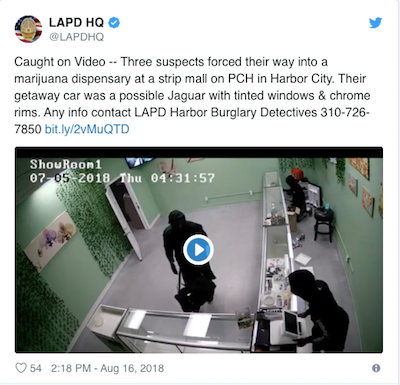