The city says it has no plans to use its powers to shut down Toronto’s only magic mushroom dispensary after a Toronto police raid earlier this month, leaving the shop still operating in a kind of grey area.

Shroomyz — a dispensary chain that first opened in Ottawa — became Toronto’s first mushroom dispensary after opening this September. While the sale of psilocybin, the active ingredient in magic mushrooms, is illegal under the Controlled Drug and Substances Act, that hasn’t stopped the store from operating out of its Queen Street West location.

Toronto previously saw a situation like this pop up — though with more city interventions — when cannabis retailers rapidly expanded in the region before pot was legalized in 2018. Now, this shop is operating in a similar sort of way, filling a void advocates say is sorely needed, though one expert cautions this can come with risk for the public.

Paul Lewin, a lawyer who specializes in issues surrounding cannabis and psychedelics, said he wasn’t surprised Shroomyz had opened in the city, given the current limited access to psilocybin for people who need it for medicinal purposes. He told CBC News he also thought a crackdown on the dispensary would eventually happen.

“There’s a general sense that the law is out of touch,” Lewin said.

“Many patients who would benefit from medical psilocybin cannot get access and this tends to happen when there’s a substance that does a lot of good and the government is making it very difficult to access it,” he added.

“Others will spring up and fill the void.”

While Shroomyz may be the only known psilocybin retail store in the city, signs promoting anonymous online businesses selling magic mushrooms can also be found across Toronto.

While the City of Toronto previously enforced bylaws on illegal cannabis dispensaries before it was legalized in 2018, it has taken a hands-off approach in enforcing any bylaws in this case. The city confirmed Shroomyz has no business licence, but said any crackdown on its operations would be a “police matter.”

“The City of Toronto does not have the jurisdiction to enforce the Controlled Drug and Substances Act nor is a business licence issued for this type of business,” said Naomi Ahmad, a city spokesperson, in a statement to CBC Toronto.

“The city issues business licences and permits to certain businesses as specified in the licensing bylaw.” 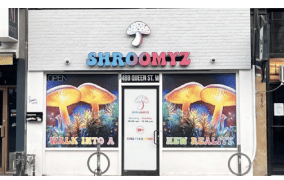