It’s obvious there’s been huge jobs growth in the sector but there are various questions that begged to be asked.
Firstly, after the layoffs at some of the bigger players and a plethora of SME businesses that have over-reached themselves in the last 12 months how good will the figures look mid 2020.
Secondly, apart from some of the overpaid executives ( who are now becoming unstuck) we ask ….Are cannabis workers being paid living wages?
We have already seen stories of some companies paying their employees with exploitative barter and exchange deals. Leafly paint a rosy picture and we don’t deny it’s a huge employment growth sector but at the same time we believe there are many underpaid, over exploited workers in the sector and the huge wage packets of some executives and lots of stats do not a stable industry make.

How many jobs are there in the legal marijuana industry? Leafly’s annual Cannabis Jobs Report found 243,700 full-time-equivalent (FTE) jobs supported by legal cannabis as of January 2020. 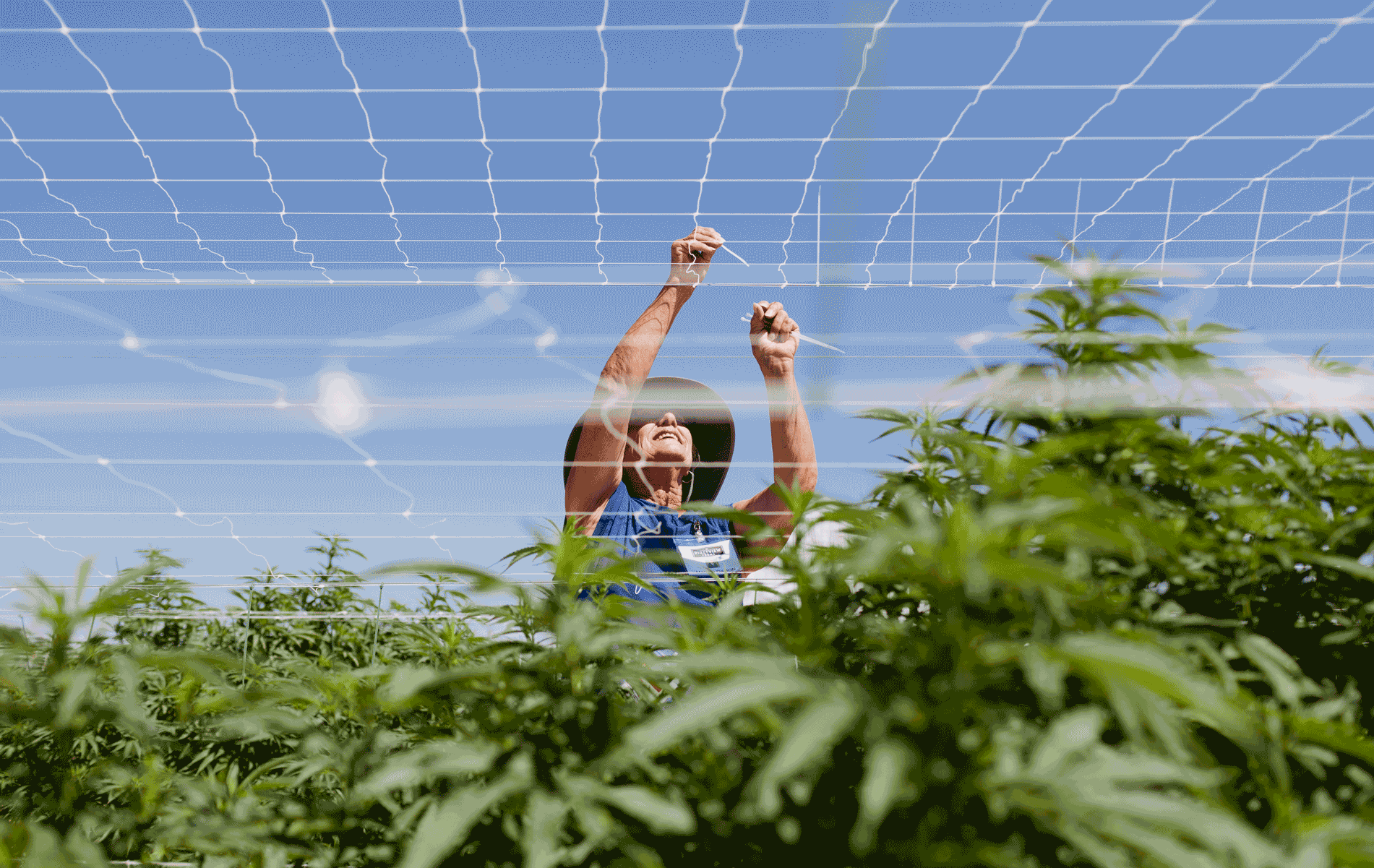 How many jobs are there in the legal marijuana industry? Leafly’s annual Cannabis Jobs Report found 243,700 full-time-equivalent (FTE) jobs supported by legal cannabis as of January 2020.

Even in a down year, the marijuana industry added 33,700 jobs.

That’s a 15% year-over-year increase. Over the past 12 months the expanding industry has created 33,700 new jobs nationwide, making legal marijuana the fastest-growing industry in America.

Florida also saw amazing growth in 2019. With more than 300,000 registered medical marijuana patients, Florida now has the most medical patients of any state. That growth in the patient base, along with the start of smokeable flower sales, boosted Florida to a 93% increase in total sales.

Leafly’s full report includes a state-by-state analysis of all medical and adult-use states.

The cannabis industry suffered its first growing pains in 2019. The irrational exuberance of 2018 gave way to the reality of a slow-growing Canadian market, shrinking investment capital, a national vaping health crisis, and layoffs at some of the industry’s leading brands.

Those setbacks were more than offset by tremendous growth in new markets like Massachusetts, Oklahoma, and Florida.

Here’s how last year’s job growth compares to that of previous years. 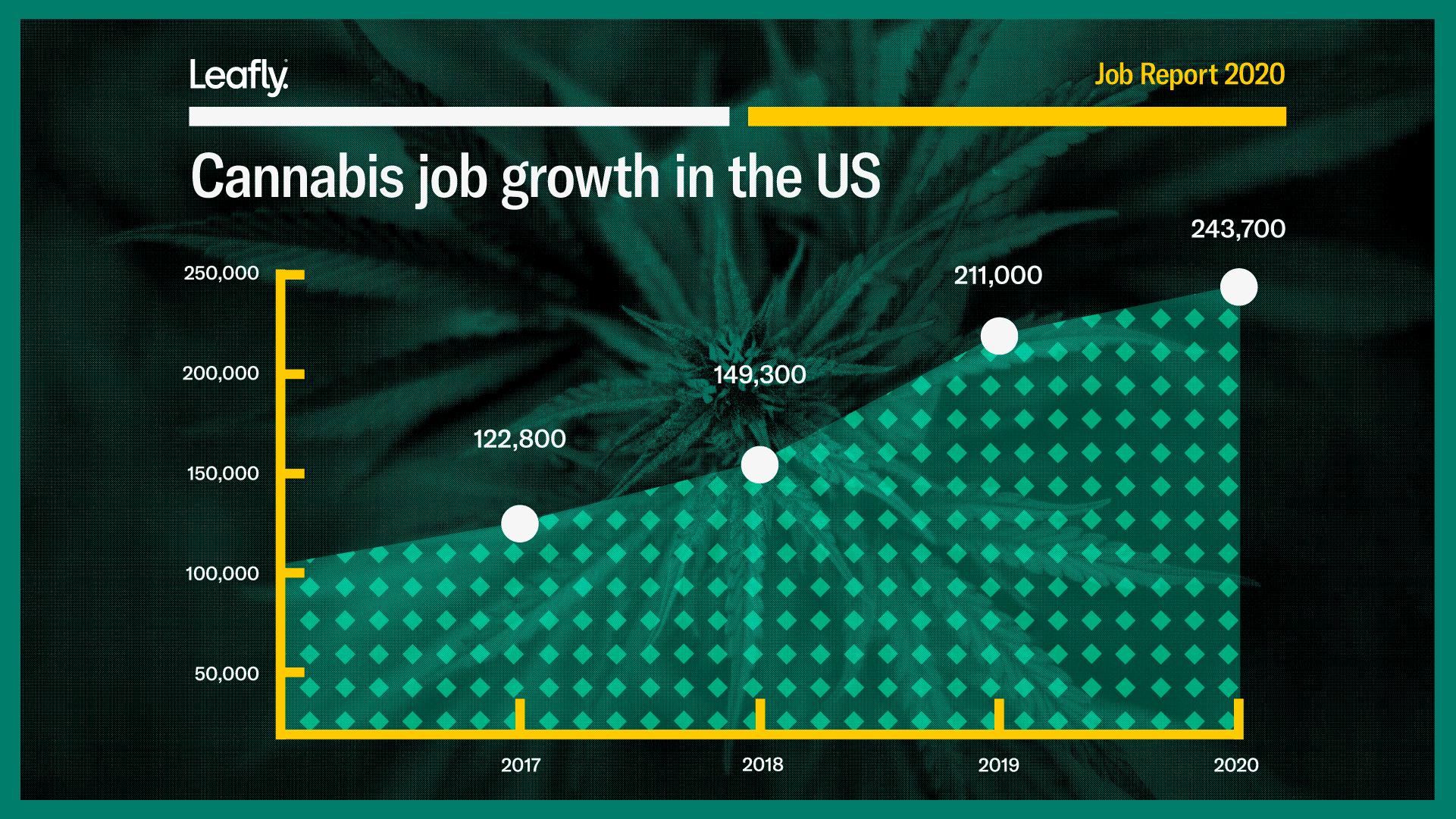 The past year’s job growth would have been even greater were it not for technical job losses in California and Michigan, two of the nation’s biggest cannabis markets.

Our estimate of legal jobs in both states fell this year due to changes in laws and regulations. The sunsetting of California’s caregiver law moved an estimated 8,000 jobs from legal to non-legal status.

Similarly, Michigan’s new regulatory scheme pushed hundreds of formerly legal dispensaries into illicit status. We expect those jobs to return over the next 24 months as both states issue more licenses and bring those jobs back into legal status.

Despite the job losses, California remains America’s biggest legal cannabis employer. But Colorado may be the nation’s biggest per-capita marijuana job market, with one job per 165 residents. California, by contrast, offers one job per 980 residents.

Where the jobs are: America’s top cannabis states 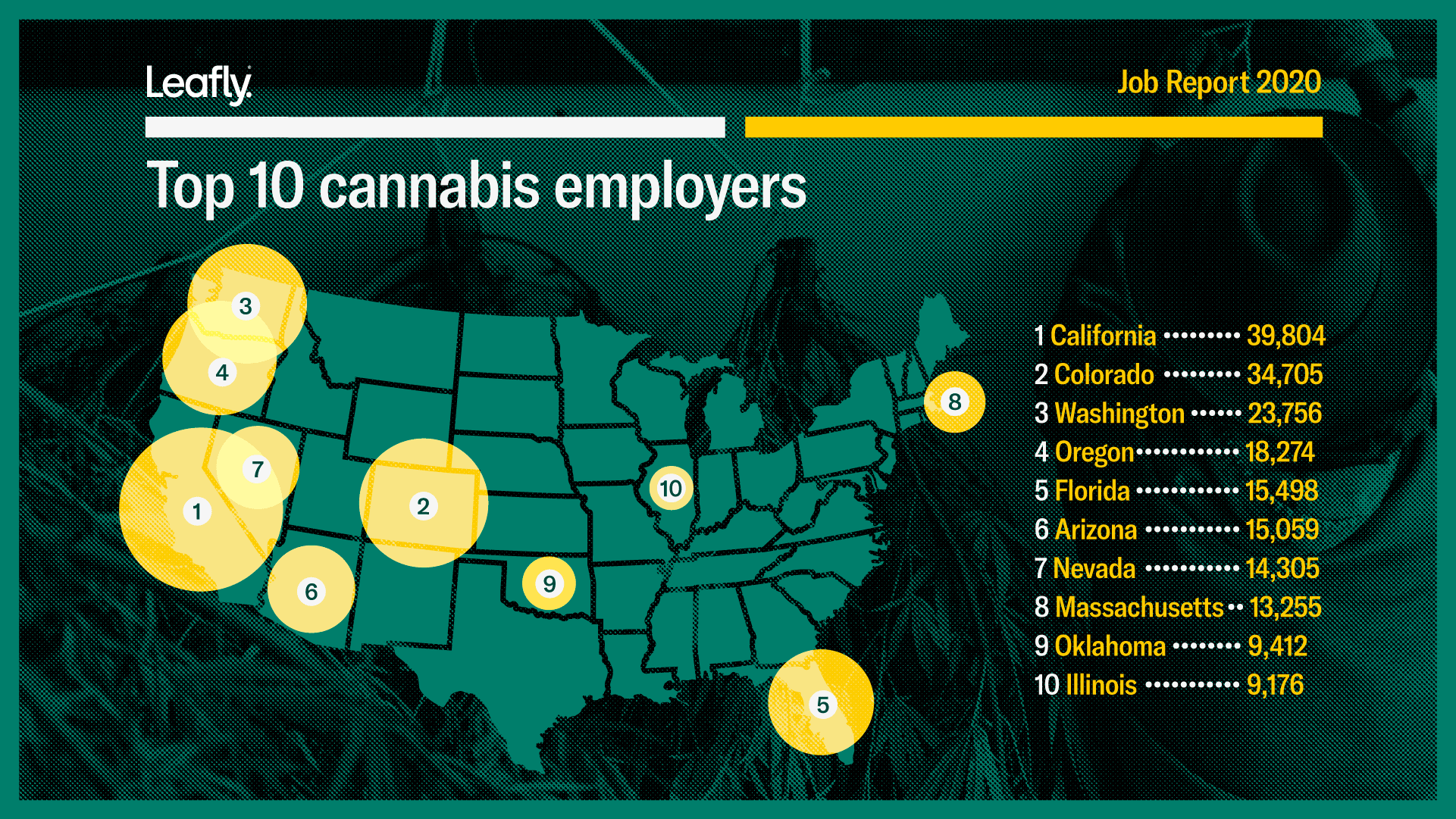 Why and how we count jobs

We started our annual jobs count four years ago when our reporters discovered that federal and state labor economists were not including state-legal cannabis jobs in their employment reports. The reason: federal prohibition.

At the time, the NAICS (North American Industry Classification System) didn’t even have a code for cannabis jobs. NAICS codes are how labor economists track how many jobs there are in a given field.

The NAICS has since created marijuana codes. But they’re practically useless. Retail marijuana stores are lumped in with art supply stores, auction houses, and hot tub stores. Cannabis growers have the same job code as hay farmers and agave growers.

Building on the groundbreaking work of cannabis-focused economists at firms like Whitney Economics and MPG Consulting, Leafly’s data team works state by state, using statistics generated by each state’s regulatory agency, to form a well-grounded estimate of jobs tied to legal cannabis.

Our jobs count does not include jobs created by CBD’s recent change in legal status. Because CBD isn’t regulated like state-licensed cannabis, there is no data yet available on which to build a jobs count. 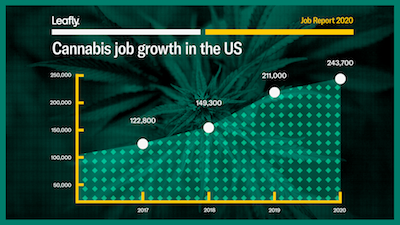