Having entered the cannabis and hemp legal space less than a year ago, the adjustment from the commercial issues I encountered working in-house for a large corporation, to those which arise during my “new” day-to-day practice are less than subtle, but certainly not dramatic. As litigation goes, things are not terribly different – as a colleague of mine once put it “a contract is a contract is a contract.”

However, going with that somewhat misguided adage, the notion that all contracts are created equal is not always true. In the last year, I have encountered the so called “hand-shake” deal on numerous occasions. Prosperous hemp farmers, dealers, and businesspeople enter into multi-million-dollar agreements to buy and sell hemp. Often, clients tell me that these agreements [ostensibly] stipulate to “high-grade” or “high-quality” hemp which is supposed to yield CBD content to a certain percentage. And, when the buyers of hemp biomass process the product, often, the product does not meet expectations. And, time and time again, I ask my clients if they have a written contract which specifies these needs – often to no avail. This sort of mentality may be a throw-back to the times when hemp and cannabis were illegal in Colorado. Regardless, there seems to be a dearth of written hemp purchase agreements in our state. While it is true, a contract – even oral – is still a contract (notwithstanding the lingering statute of frauds arguments one may encounter) having a formal written agreement with quantity, price, and terms always trumps an email and a handshake.

I do not write to critique business practices that may make our lives as attorneys – and our clients’ lives – more difficult. My preamble was to point out that litigation is often the culmination of many things. Sometimes it is a series of unfortunate events. Sometimes it is people who have perfect transactional business work backing their business decisions but want to fight. Sometimes though, it is something as simple as lacking a formal written agreement regarding what the parties want. When things do break down though, it is much easier, cost effective, and efficient when a contract is in place to litigate – rather than waiting until trial or using an affidavit to attempt to prove a he-said/she-said.

These contracts usually identify the production practices to be used, identify the party responsible for supplying the required resources, and specify the quantity, quality, and method of payment for the product. Major advantages of production contracts include: (1) providing contractors with overall control of supply; (2) enabling contractors to exert influence over the production process so that a uniform product is produced; (3) forcing parties to invest in technological advances in production equipment because financial returns are more likely when technical information to producers is given in a controlled manner; (4) and effectively guarding processors from liabilities, such as labor or environmental consequences.

The real disadvantage of a production contract though is to contractors, who assume the market risk. Guaranteeing a certain level of payment for any commodity comes with risk that the market price will change in a detrimental fashion. Also, as with any contract, a production contract can be drafted to favor one party over another – this sort of disproportionate consideration often occurs when one party lacks bargaining power.

The moral of my post? Work toward forcing clients into thinking about some sort of written agreement prior to entering into any sort of transaction or processing agreement. While litigation of that same agreement may be inevitable, it will cut down on litigation fees if there is written basis for parties to work off of during the pendency of the dispute. 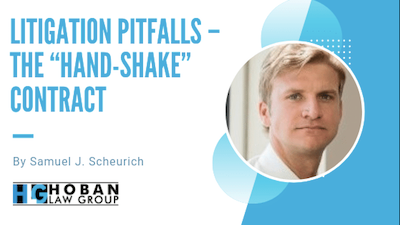