BAKERSFIELD, Calif. (KGET) — The man suing Kern County for $1 billion after claiming millions of plants seized and destroyed near Arvin in 2019 were hemp, not marijuana, now has cases pending in both civil and criminal court.

Trent Jones has a pretrial hearing next week on misdemeanor charges of planting more than six marijuana plants, possession of marijuana for sale and selling cannabis in an unincorporated area. The charges were filed in September.

A probable cause declaration filed in the case said Jones did not have a proper research agreement for the fields where he grew cannabis. It said Jones cultivated more than a dozen marijuana plants in violation of state and county laws, and he sold about 200 pounds of hemp seeds to a company without a permit.

Meanwhile, the federal lawsuit he filed against the county and the California Department of Fish and Wildlife has a hearing set in April. Phillip T. Jenkins, with Kern County Counsel, said he’s awaiting the judge’s ruling on his motion to dismiss the case.

Jones, founder and researcher of Apothio LLC, claims he was legally growing hemp valued at $1 billion that the county unlawfully seized. Hemp is a variety of cannabis, but does not have as many intoxicating compounds as marijuana.

Sheriff’s officials, however, said the plants that were seized tested above the legal federal limit for hemp of 0.3 percent THC — the active ingredient in marijuana. The sheriff’s office said many of the plants were grown under the guise of hemp but were actually marijuana. 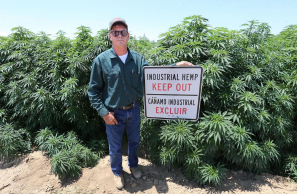