As the cannabis industry keeps growing, it’s on track to set a fresh record in its spending on lobbying Washington.

After shelling out $2.7 million to influence lawmakers and regulators in 2018, the industry has disclosed outlays of at least $1.6 million in 2019’s first half, putting it on pace for a new spending record by year’s end. This year’s total at the halfway mark already slightly beats 2017’s overall figure.

The outlays on lobbying come as members of Congress roll out a range of bills that would affect the industry, such as the STATES Act, which aims to protect U.S. states that have legalized marijuana, and the SAFE Banking Act, which seeks to help banks that serve cannabis companies.

Related: Republicans and Democrats agree that U.S. marijuana laws are a mess

To be sure, the sums involved fall short of the lobbying spending by bigger Washington players. Facebook Inc. FB, -1.93%  alone, for example, spent $7.5 million on trying to influence Washington in this year’s first half. But the stepped-up lobbying is another sign that the pot industry is becoming more like other sectors. One cannabis company executive — Mark de Souza, CEO of Illinois-based Revolution Enterprises — said in an interview this month that the increased lobbying also has to do with conflicts with other types of companies. 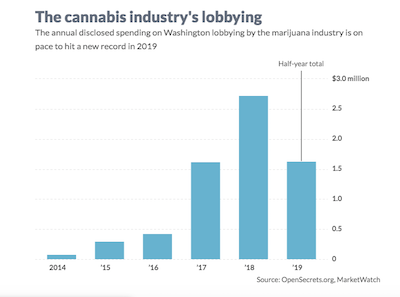