MARIJUANA COMPANY officials have long complained about the excessive fees imposed by communities statewide. Now, one marijuana-friendly city is going in the opposite direction. Northampton recently decided to waive the community impact fees it has been charging marijuana businesses and reimpose them only if there is a specific need.

Northampton appears to be the first city in Massachusetts to take this step, which involves foregoing a revenue source that raised $1.8 million for the city last year.

“I think it aligns with Northampton’s record of trying to welcome people, trying to not put up barriers, trying to treat this industry like all other industries in Massachusetts,” said Mayor David Narkewicz.

Narkewicz said waiving the fee is also a way to “promote equity and access” by making it easier for entrepreneurs with less start-up money to open a business.

The move shocked Charlotte Hanna, CEO and founder of Community Growth Partners, who owns the marijuana store Rebelle in Great Barrington and had signed a host community agreement in Northampton to build a marijuana grow facility.

Hanna received a letter from Narkewicz in mid-January offering to amend her host community agreement to waive the fee. “I just said ‘wait a minute, hold on, am I really reading this correctly?’” Hanna recalled. “I’ve never heard of an elected official unilaterally cutting taxes, especially in this environment.”

Hanna noted that marijuana businesses already pay 20 percent in state and local taxes, and they have an enormously high effective federal tax rate since they are not allowed to deduct business expenses. The community impact fee, Hanna said, was “just another thing adding to the cost passed on to the consumer.”

Hanna said all the fees and taxes add up and create a financial disincentive for customers to come in and buy marijuana legally.

Northampton is already a leader in the marijuana industry. New England Treatment Access opened the state’s second medical marijuana dispensary there in 2015 NETA opened for recreational sales in November 2018, one of two stores to open on the first day of legal recreational sales in Massachusetts.
Narkewicz was NETA’s first customer.

The city has signed 23 host community agreements with 17 different companies, including three medical dispensaries, 12 recreational retailers, six product manufactures, three growers, a testing lab, and a transporter. Three of the retail stores are open so far.

Northampton has a standard host community agreement that it signs with all prospective marijuana businesses. Until now, that has included a community impact fee of 3 percent of gross sales revenue, which is the maximum allowed under state law and has become the standard throughout the state. These fees are in place for the first five years a business is open.

In the letter Narkewicz sent to all the city’s marijuana establishments earlier this month, he wrote that the city has had sufficient experience with marijuana businesses that he is comfortable proposing a new approach. Under that approach, the impact fees will be waived “until and unless the city is required to expend funds to mitigate specific impacts from your particular marijuana establishment.” That will let the city recoup any actual costs it has to spend, up to 3 percent of a company’s sales revenue. But if there is no specific expenditure, the company will not pay anything.

The city intends to waive the fees for 2021. So far, it has amended three host community agreements, and others are in the process of being renegotiated.

Narkewicz said he could not predict how much money the city will forgo by waiving the fees, but he noted that Northampton never relied on that money for its operating budget, instead using it for one-time capital projects. Officials can still collect the money if there is a specific need or if a problem arises. For example, Northampton used community impact money from NETA to repave a nearby street, redesign a sidewalk, and add more parking near the store.

The standard host community agreement had also required the businesses to set aside $10,000 for a non-profit to use for a marijuana education and abuse prevention program. The amended agreements eliminate the $10,000 donation.

Narkewicz said the $10,000 donation was run as a grant program, where the money would only be used if a nonprofit applied for the money. Practically, it was only used once, for a marijuana safe-storage education campaign funded by NETA and run by a local nonprofit.

These additional donations have been the subject of controversy, with questions pending before the Supreme Judicial Court about whether they are legal under a state law that caps community impact fees but is silent on other donations.

The city will continue to collect the 3 percent local excise tax on marijuana.

NETA president Joseph Daddario III said Narkewicz has long been an advocate for NETA and other city businesses. “We appreciate his understanding of the many benefits the cannabis industry has brought, not only to the well-being of the community but also the contributions to the fiscal health of Northampton,” he said.

Asked whether the eliminated fee might translate to lower prices for consumers, Daddario said, “We are considering using any funds to improve the customer experience at NETA.”

Youmans said Northampton is sending a signal that it is “open for business,” and he hopes other municipalities will mimic Northampton in the recognition that legal marijuana businesses can be job and revenue creators.

Northampton’s shift comes as the Cannabis Control Commission has been asking the Legislature for authority to monitor host community agreements, out of a concern that many municipalities are charging more than the 3 percent community impact fee allowed under state law. The Supreme Judicial Court will hear a case in February that could address the question of excessive fees and also affect how much authority communities have over which companies to enter a host community agreement with. 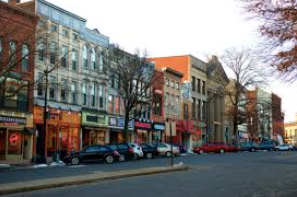