Massachusetts Report: An Analysis Of Cannabis Host Community Agreements In The Commonwealth of Massachusetts

EXECUTIVE SUMMARY Sponsored by the Massachusetts Cannabis Business Association, this report reflects the research of Dr. Jeffrey Moyer of the McCormack Graduate School of Policy and Global Studies at the University of Massachusetts Boston, who independently refined research questions and designed and conducted analysis of Host Community Agreements between Massachusetts municipal governments and cannabis business operators.

The subject of legal and media scrutiny, implementation of the Host Community Agreements set forth in the November 2016 legalization of cannabis as amended by the Legislature in Massachusetts continue to reflect disagreement about the interpretation of certain provisions of the law and the regulatory role of the Cannabis Control Commission.

To better understand the variance, this study conducted a systemic coding review of 460 Host Community Agreements (covering over 85 percent of issued licenses obtained by public records request to 149 Commonwealth municipalities).

The review revealed particular variation in descriptions of community impacts of cannabis businesses and the means by which agreements attempted to control for these impacts. A significant proportion of the agreements provided financial incentives for host communities over the legal cap, amounting to an excess of $2.46 million (though some payments precluded calculation), whether through reimbursements, local charity donations, so-called “community benefit payments,” or donations of employee time to education efforts. A further records request to towns that had already collected funds showed that few municipalities had any plan for spending them, and those plans that were provided did not align with the guidance of the Cannabis Control Commission.

Many of the agreements obligate operators to make payments toward poorly defined or inadequately operationalized impacts, with little provision for review or accountability. With Massachusetts cannabis retail sales over $393 million in the first year (between 11/20/18 and 11/20/19), localities are poised to benefit from nearly $12 million in revenue, for which there is little oversight.

We recommend that the Legislature promptly authorize the Cannabis Control Commission to issue regulations on Host Community Agreements.

We recommend that the Cannabis Control Commission establish standards for what agreements can pay for as well as a more robust and transparent accounting structure to track funds, including a provision allowing the Commission to void unlawful portions of agreements or to decline license renewal to operators under agreements that include unlawful financial incentives—to include “voluntary” donations to local groups and reimbursements for costs beyond the impact fee.

We also strongly recommend that municipalities assess their Host Community Agreements in compliance with state law and guidelines issued by the Cannabis Control Commission. 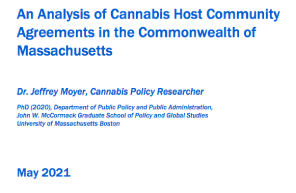