May 7 2021: Debate in Kansas House on legalizing medical marijuana in state

The bill known as House Substitute for SB158 cleared the House Committee on Federal and State Affairs in a 13-8 vote. The bill would need to clear both the House and Senate before the end of this session and be signed by Gov. Laura Kelly to become law. The measure has received pushback from law enforcement groups that say that there’s not enough evidence that marijuana can treat medical conditions such as post-traumatic stress disorder and Parkinson’s disease. 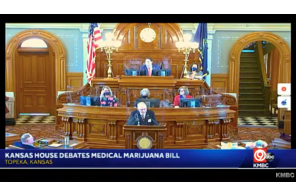