Health Europa reports that a Medical Psychedelics Working Group has now been launched in the UK to campaign for the rescheduling of all psychedelic drugs for research and medical purposes.

Launched by the non-profit, independent scientific body Drug Science, the Medical Psychedelics Working Group will be composed of academics, researchers, and policymakers, aiming to reschedule psychedelics to allow for research examining their therapeutic benefits.

Professor David Nutt, who has been spearheading research into psychedelics and cannabis in the UK, said: “It has been argued by one of the pioneers of psychedelic research, Stan Grof, that ‘psychedelics used responsibly and with proper caution could be for psychiatry what the microscope is for science and medicine, and what the telescope is for astronomy.’

“We had a resurgence in psychedelic research in the 50s and 60s, then LSD was banned, largely because of the Nixon ‘War on Drugs’ and the fact that the US government believed it was fuelling an anti-war movement in part championed by Timothy Leary. Psychedelics were banned on the basis of lies about their harms. I would argue this is the worst censorship of research in the history of the world – certainly in relation to anything to do with biomedical science.

“Now a number of research groups are breaking through this barrier and finding powerful therapeutic effects that are inducing health care companies into the field. The future looks promising, especially if we can move these drugs out of Schedule 1 to loosen the barriers to access for researchers.”

Drug Science provides an evidence base free from political or commercial influence, creating the foundation for sensible and effective drug laws, by delivering, reviewing and investigating scientific evidence relating to psychoactive drugs.

Drug Science believes that the future of psychedelic medicine is extremely promising, and there is potential for widespread application of psychedelic drugs within public health models. The UK is a world leader in the development of clinical psychedelic research, which is now expanding globally.

However, current UK regulations have created serious and considerable barriers to legitimate research associated with Schedule 1 regulations. While current legislation does not preclude scientific research with these drugs, it does make them significantly more difficult, time-consuming and costly to study.

With a greater understanding amongst policy makers, academics, the media and the general public, there are realistic prospects of regulatory approval, leading to the evidenced possibility that medical psychedelics can be used safely, feasibly and with the potential for lasting therapeutic benefits.

Building off the success of the Medical Cannabis Working Group, the Medical Psychedelics Working Group is a consortium of Drug Science experts, leading academics, researchers and policy specialists, supported by industry partners.

At launch, we released a series of educational materials for health care professionals (HCPs & trainees) that examine the history, law and pharmacology of MDMA and Psilocybin. It is essential that HCPs learn about the benefits and potential harms of these substances. These slide sets will enable future HCPs to provide patients with valuable information and help support them in their decisions about their treatment plan. 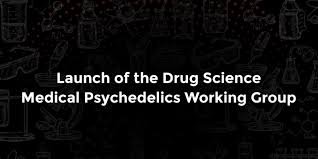