Mexico: Senator Julio Menchaca Salazar presents initiative to reform articles 235 and 247 of General Health Law to regulate use of cannabis for recreational or recreational purposes for persons of legal age.

Senator Julio Menchaca Salazar presented an initiative to reform articles 235 and 247 of the General Health Law and regulate the use of cannabis for recreational or recreational purposes for persons of legal age.

He indicated that clear information and rules will allow the medicinal and textile use of the plant; regulate the certification of the seed, its production and distribution, as well as alert society about the damage caused by the abuse of its consumption.

The legislator of the Morena Parliamentary Group insisted that the ban has only generated the creation of an organized mafia, violence, crime and resources that enter an illegal business.

He said that several states of the American Union, Canada and Uruguay have approached the issue seriously and responsibly. Thus, he announced that next week there will be a series of discussions where various experts will set their views on the regulation of marijuana.

With the proposal of the senator, “ authorization from the Ministry of Health will be required for planting, cultivation, harvesting, preparation, possession and transportation, for the self-consumption of persons of legal age for recreational or recreational purposes, of the narcotic drug“ cannabis ”(sativa , indica and americana or marijuana, its resin preparations and seeds ”, as well as tetrahydrocannabinol and its stereochemical variants, together, known as marijuana.

The initiative was signed by Senators Miguel Ángel Navarro Quintero, Rubén Rocha Moya and Lucía Trasviña Waldenrath, also from Morena. It was taken to the commissions of Justice, Health and Legislative Studies, Second.

As always Marijuana Moment is the best with the analysis 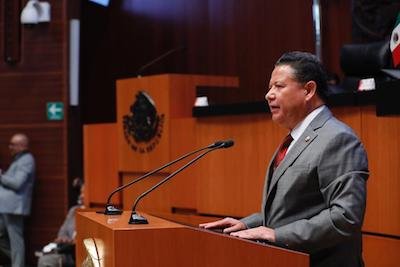